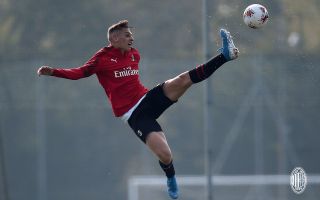 Two more promising AC Milan youngsters are in line to make the jump from the Primavera to the senior team, according to a report.

Daniel Maldini made his senior debut for the Rossoneri during last month’s 1-1 home draw with Hellas Verona, becoming the third generation of the family to have played for the Rossoneri after his father Paolo and grandfather Cesare.

Today’s edition of Tuttosport (via MilanNews) takes a look at who is likely to be next to make the jump from Milan Primavera, where there are several very promising talents.

In addition to Maldini Jr., the jewels of Giunti’s side include Marco Brescianini, a central midfielder and the current captain who has often appeared in the first team squad and played in the International Champions Cup over the summer. In all competitions, the 20-year-old has eight goals and two assists in 16 games.

Then there is striker Luan Capanni who arrived from Lazio in the summer. The 18-year-old has eight league goals in just 11 appearances in the Primavera 2a this campaign.