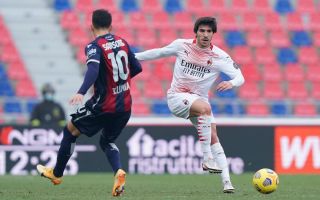 Tuttosport: Tonali not performing in line with the club’s expectations but faith still remains

Summer signing Sandro Tonali has far from convinced the Milan management with his performances since arriving, according to a report.

A move to Inter seemed all but sealed for Tonali, but the Nerazzurri’s reluctance and Antonio Conte’s demand for more experience in the middle of the park allowed Milan to act quickly and swoop to seal a deal within 72 hours. It is reported that Milan will sign Tonali on the formula of a €10m loan plus a €15m option to buy and €10m in further bonuses, and a future sell on fee of 15 per cent.

According to Tuttosport (via MilanNews), Ismael Bennacer will start in Sunday’s game against Crotone at San Siro and Tonali will make room for him. The 20-year-old has not completely convinced in his first few months with the Rossoneri.

The young midfielder has not (yet) performed according to the expectations of the club, which still believes in the potential of the player. Of course, competition is once again important with Bennacer’s return and finding space will not be as easy as before, but Sandro will have his chances.