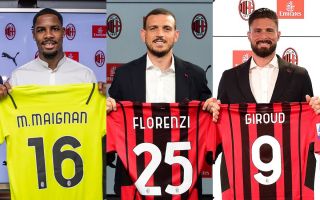 Tuttosport: Trio of signings could all feature for Milan against Sampdoria tonight

AC Milan are currently gearing up for what will be their first game of the season, taking on Sampdoria away from home. There will be some new faces for the Rossoneri, both in the XI and on the bench.

As highlighted by Tuttosport (via MilanNews), Mike Maignan and Olivier Giroud will play from the first minute and will thus make their official debuts for Milan. The two Frenchmen will have to prove themselves, replacing two very good players.

Then there is Alessandro Florenzi, who was announced by the club on Saturday morning. He will be on the bench but could make an appearance in the second half, per the newspaper, depending on what the match is looking.

Fode Ballo-Toure is also a completely new player for the Rossoneri but he isn’t expected to get any minutes today. He could, of course, but only if Milan are comfortably leading or Theo Hernandez gets injured.