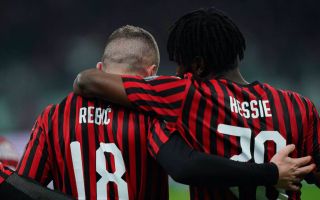 Tuttosport: Value of Milan quintet has risen by €100m – Pioli deserves the credit?

The impact that Stefano Pioli has had on the valuations of certain players is remarkable, at least according to what Tuttosport are reporting.

The paper (via MilanNews) claims that the value of Bennacer, Kessie, Rebic, Theo Hernandez and Calhanoglu has increased by a total of €100million.

Bennacer and Theo Hernandez arrived last summer for €16m and €20m respectively, but now their assessment has jumped to €42m and €50m.

Rebic’s value has doubled from €20m to €40m after an explosive start to 2020, while for Kessie and Calhanoglu there has also been a sharp increase. The value of the Ivorian rose from €21m to €30m, while that of the Turkish rose from €20m to €35m.

It is perhaps yet another message to the club’s hierarchy regarding the future of head coach Stefano Pioli, who deserves a lot of credit for the resurgence of the team and of certain individual players who were struggling prior to his arrival.

Tuttosport: Just one selection doubt for Pioli to resolve ahead of Atletico Madrid’s visit
27 September 2021, 10:57
Serie A Standings