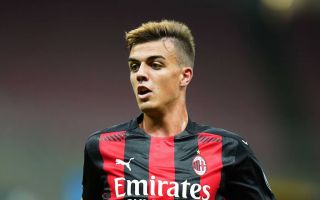 It was revealed that Daniel Maldini received a total of 12 offers over the summer. However, all those offers were rejected.

Maldini is a young Italian professional football player who plays as an attacking midfielder. He is also a former Primavera player who dominated the youth side as a trequartista. This is also because he scored a total of 9 goals and 4 assists across the league and cup.

More football news also said that there were 2 Serie A and 10 Serie B teams showing interest in Maldini.

On the other hand, AC Milan had a busy transfer window. As a matter of fact, both Paolo Maldini and Ricky Massara worked around the clock to train the squad and work on the club’s financial status.

Before joining Milan, he also played with Manchester City and Real Madrid. He is also known as a quick-footed trequartista with his sleek movements.

He is known as a winger and striker who scored a goal against Milan in a narrow 2-3 defeat. Hauge also had an excellent start with Bodo/Glimt amassing six goals and assists before his move.

Dalot is known as a full-back and winger with great crosses, piercing passes, and excellent vision. He also led Portugal to win during the 2016 UEFA European Under-17 Championship.

Tatarusanu is an experienced goalkeeper who has made more than 180 appearances throughout his career. He is also a player of the Romania national team since 2010 which earned him a total of 60 caps.

Tonali is a midfielder who showed a promising rhythm in his previous games. In fact, he won the Serie B title with Brescia in 2018-19.

Kjaer showed a swift and promising centre back play towards the end of the previous season. He also played in a total of 100 games for Denmark. This includes UEFA Euro 2012, 2010 FIFA World Cup, and 2018 FIFA World Cup.

He is an energetic winger who is known for his high work rate. Aside from being a winger, he can also play as a midfielder or as a defender.

Ibrahimovic is a veteran striker who is one of the most decorated active football players. What’s impressive is that he also made more than 100 appearances for the Swedish national team.

He is a winger for both Serie A club Milan and the Croatia national team. Aside from that, he can also play as the second striker. He has also played at the FIFA World Cup in 2014 and 2018.