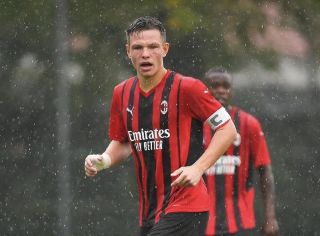 Last summer, around the same time, AC Milan decided to bring in Emil Roback, Lukas Björklund and Wilgot Marshage for the youth teams. All three have done very well and the latter now captains the U18 side.

Over the last few years, it’s clear that not only Milan but also Italian clubs have shifted focus to Scandinavia and the talent that can be found there. Jens Petter Hauge is another example of that, arriving for relatively little money despite the amount of talent he has.

The aforementioned Swedish trio, which we did a long piece on last year, was more so intended for the future given their respective ages. Roback is 18-years-old while Björklund and Marshage are both 17-years-old.

Marshage is currently the captain of Milan’s U18 side and in eight games this season, he has found the back of the net two times. The central-midfielder recently spoke to our friends at Milan Club Svezia about advice he got from Ibrahimovic, what it was like to train with the first team and the family feeling at Milanello.

“I’ve done a few training sessions with the first team and Zlatan has been there every time. I have also talked to him off the pitch. He told me that it is important to learn the language, to keep working and not lose your head. You should just keep going regardless of adversity or prosperity and always give 110%.

“He thought that it looked good [in training], so that was fun. When you are with the first team, you get treated well. It’s like a family. You should feel at home even if you are from the U18 or U19 team, Milan have managed that very well,” he stated.

READ MORE: Pioli left with selection doubt ahead of trip to face Atletico Madrid – the latest