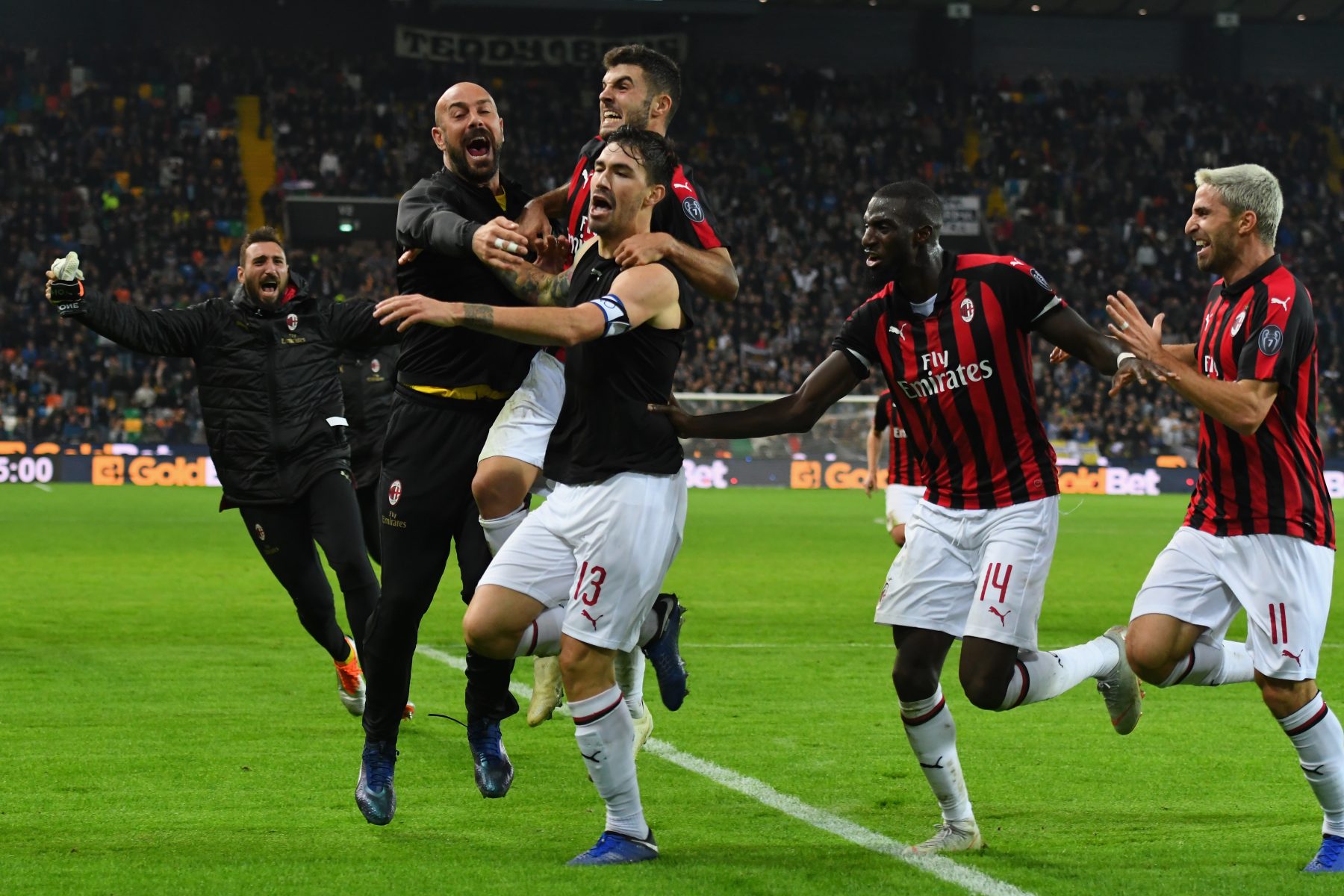 AC Milan moved back into the top four in dramatic circumstances with a 1-0 win at Udinese on Sunday night.

Alessio Romagnoli – who was the hero against Genoa four nights prior – popped up with another added time winner to help the Rossoneri earn three points.

Gianluigi Donnarumma (7): Did all that he can; saved the shots that he could when called into action. Still looks a little uncomfortable when playing out from the back. Got his first clean sheet of the season, and good saves to keep this team in the game.  Only faced three shots on target.

Ricardo Rodriguez (6): As usual played well as a LB doing his best to shut down the Udinese attack. Starting to create chemistry with Laxalt on the left side.

Cristian Zapata (5): Had a tough job controlling this Udinese attack, -was caught a few times ball watching. Kevin Lasagna got the better of Zapata this evening.

Alessio Romagnoli (8 – MOTM): Played a great game and had to cover for some Zapata mistakes. Alessio has been doing a great job as captain for this team, holding the defence together at times. Able to pass the ball out from the back when they where in a dangerous position, and of course scored the winner again.

Ignazio Abate (6): Did better than he has so far this season. Was able to keep up with most Udinese attacks down his side and linked up well with Suso on the right.

Diego Laxalt (6.5): Started the game well playing as a LM with Rodriguez playing LB. Once Higuain come off injured in the first half, he looked uneasy playing CM, and a little sloppy in the second half.

Tiémoué Bakayoko (6): The best ‘Yoko’ has looked in the Milan jersey – he is gaining confidence with every start that he gets. Looked uneasy when Milan where defending in their own end, but made up for that with some great passes in the final third. As soon as he was given the ball he was trying to pass it away, needs confidence dribbling. First touch has gotten better.

Franck Kessie (6): Has done well making the change from a 4-3-3 to a 4-4-2. Looked good playing with Bakayoko in the midfield and they are starting to create some good chemistry to hold down the middle of the park. Made some good runs into the final third, but decision making still needs work.

Suso (7): Started the game slow playing RM, but as the game went on started to move up the flank. Once Higuain came off in the first half and the team moved into a 4-3-3, Suso started to look himself. Had some good shots on net, and assisted the winning goal.

Patrick Cutrone (7): Had a few good chances, and is looking dangerous playing as a duel striker with Higuain. Was able to get into some good positions thanks to the pressure from the midfield. Was arguably the difference maker in the game winning goal, being able to take the ball up the wing and pass to Suso who found Romagnoli. 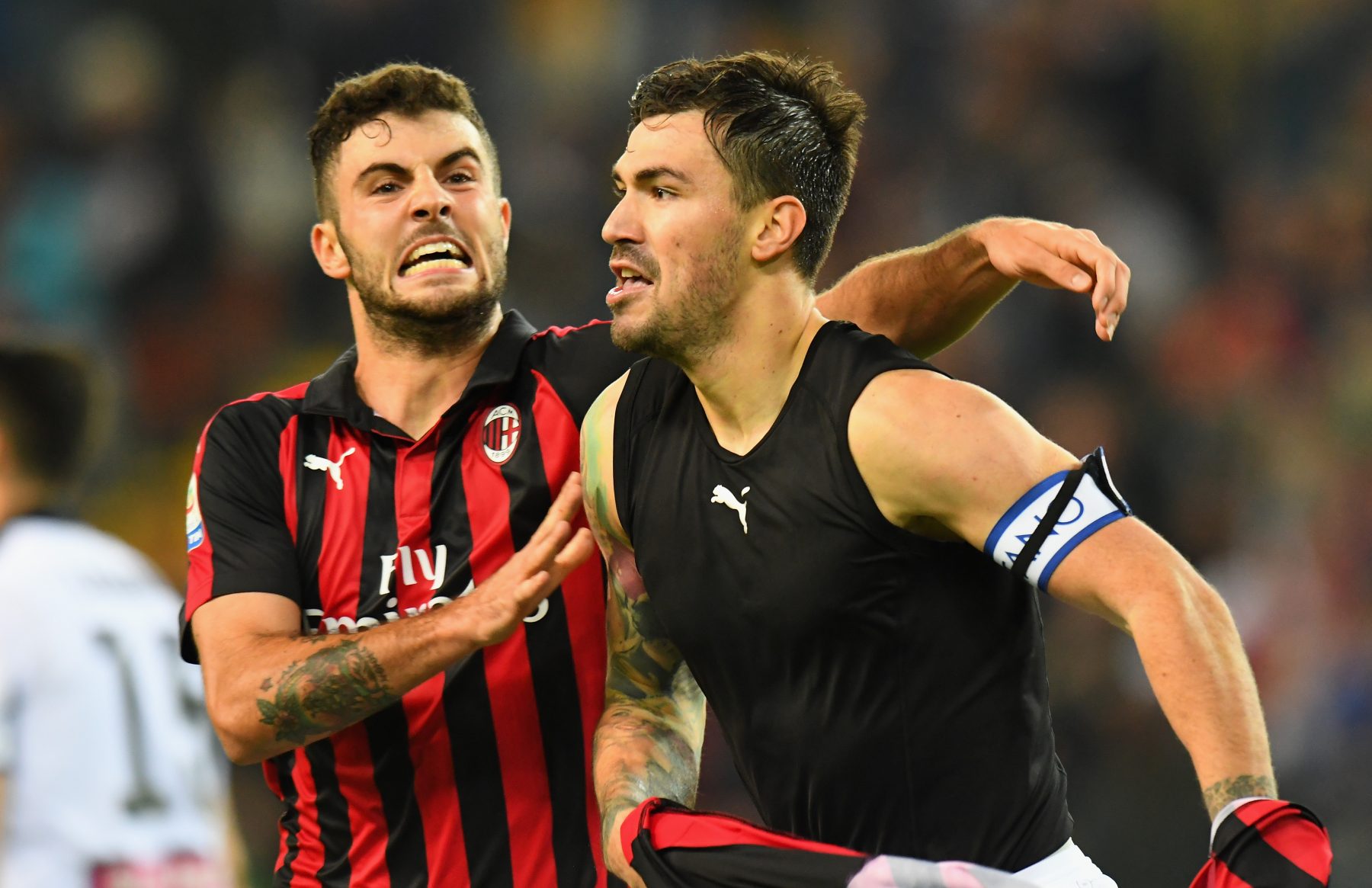 UDINE, ITALY – NOVEMBER 04: Alessio Romagnoli of AC Milan celebrates after scoring the opening goalduring the Serie A match between Udinese and AC Milan at Stadio Friuli on November 4, 2018 in Udine, Italy. (Photo by Alessandro Sabattini/Getty Images)

Gonzalo Higuain (5): Only played 35 or so minutes, but wasn’t able to do anything constructive with the ball. Every time that he had the chance to pass off, he decided to dribble and lost position, but hopefully his lower back injury is not serious.

Samu Castillejo (6.5): Came on for Higuain in the first half, and played well on the left side, while generating numerous shots on net. He was unable to beat Udinese’s keeper, and lost confidence in his shooting ability.