Marco Giampaolo was condemned to defeat in his first league match as AC Milan boss, with his side losing 1-0 at Udinese.

In a cagey opening day encounter it was fitting that the winning goal came from a set piece, and it was defender Rodrigowho headed home 18 minutes from time.

Milan were on the whole disappointing, finishing the game with zero shots on target, but could have arguably had a penalty six minutes from time for a handball which went to VAR.

However it wasn’t given, and the Rossoneri were forced to settle for their fifth defeat in their last eight away games against Udinese.

The opening stages at the Stadio Friuli were as tentative as you might expect from a game in the early stages of the season, with both sides feeling each other out and trying to keep the ball as much as possible.

The home side though were the first ones to build a sustained period of pressure playing through the wings. One cross resulted in a frantic back-post clearance from Fabio Borini which resulted in a spell in which they won three corners in quick succession, but no real clear-cut chances.

Lucas Paqueta was shown Milan’s first yellow card of the season for a late challenge on his opposite number, with Jajalo firing comfortably over from the advantage played by referee Fabrizio Pasqua.

The Rossoneri thought they were through on goal in the 25th minute as Paqueta fired a ball to Krzysztof Piatek in behind, but the recovery challenge from Troost-Ekong was exceptionally timed.

Marco Giampaolo’s side were beginning to find for incision with their passes through the middle, and Suso shot wide not long after from a range reminiscent of his screamer at the same ground two seasons ago. 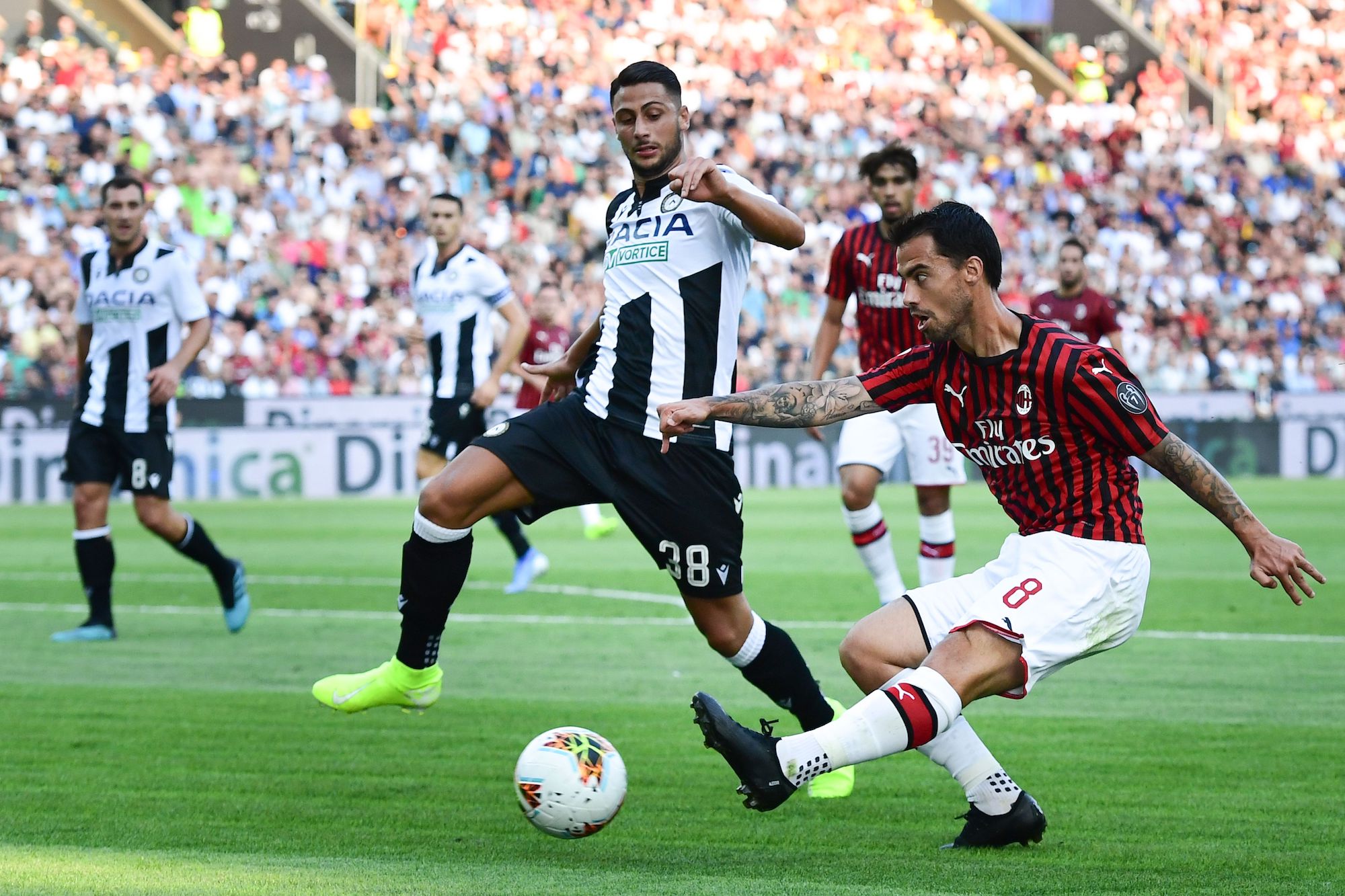 Hakan Calhanoglu became the second man to enter the book 11 minutes before the break as he cleaned out Rolando Mandragora.

Samu Castillejo briefly excited the travelling supporters minutes later when he darted between two defenders, but Piatek could not get a clean shot off from his pull-back.

Udinese began to press towards the end of the half and arguably could have done better when Gianluigi Donnarumma found himself stranded after coming off his line to clear. However, Kevin Lasagna rushed his attempt and put it into the stands.

Fabio Borini was then given a yellow card for hauling down his man on the break, while VAR was utilised for the first time on a Samu Castillejo handball that was rightly waved away.

The second half started in a more open fashion than the first 45 minutes, with Mandragora and Seko Fofana each testing Donnarumma with strikes from distance, but both being saved comfortably.

Borini tried his luck from a narrow angle with a fierce drive that in the end whizzed over, while Paqueta fired just wide from 25 yards out on the hour mark.

Borini came off moments after that, with Franck Kessie taking his place.

The Rossoneri continued to press their hosts and twice had good shooting opportunities, but first Castillejo and then Piatek both blazed comfortably over from just outside the box.

Udinese briefly caused Milan panic in the 68th minute when a cross from Pussetto found Lasagna unmarked, but the forward glances his header wide.

There was then a moment of controversy as Piatek was played through on goal by Suso, and the Poland international went down claiming Troost-Ekong had pulled him back.

The Udinese defender then protested furiously in the striker’s face to the extent that Piatek claimed he had been slapped, but neither were found to be fouls.

From the corner that resulted after the incident, the home side took the lead. A corner from the substitute Rodrigo De Paul was met by the head of Becao, who thundered home from inside the box to make it 1-0.

A second change followed for Milan immediately after the goal, with Rodrigo Leao coming on in place of Castillejo to make his Serie A debut.

Donnarumma was called into action again to deny a sharp shot on the turn from Lasagna inside the area which was destined for the roof of the next.

Moments later, Giampaolo made his final change as Ismael Bennacer came on for Lucas Paqueta.

VAR was called into action again in the last ten minutes as a corner appeared to strike the arm of Samir as Leao was stooping in to head, however the referee decided not to award it after watching on the screen.

Udinese saw out the closing stages without any real trouble to condemn Milan to their first defeat of the 2019-20 season.