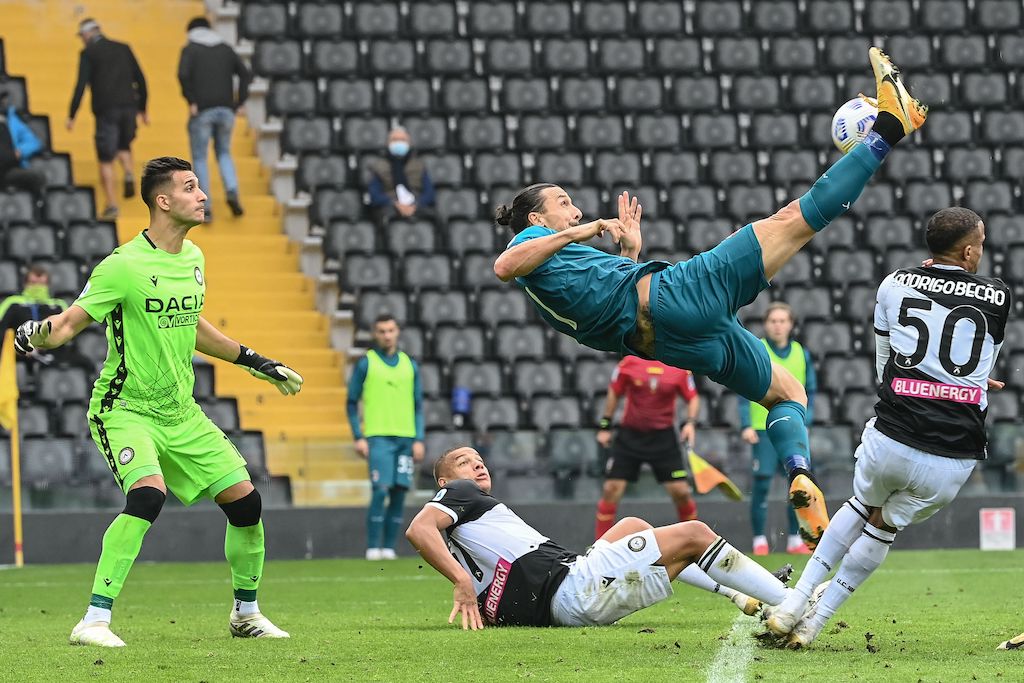 AC Milan extended their lead at the top of the Serie A table temporarily to four points with a hard-fought 2-1 win over Udinese on Sunday.

Inside the final 10 minutes though, Zlatan Ibrahimovic came up with the decisive contribution as his bicycle kick from close range sealed a vital three points for Milan.

Stefano Pioli made a number of changes compared to the starting XI that beat Sparta Praha 3-0 on Thursday night, as Gianluigi Donnarumma, Theo Hernandez, Franck Kessie, Alexis Saelemaekers, Hakan Calhanoglu and Rafael Leao all took their place in the line-up again.

Donnarumma was the first goalkeeper called into action although it wasn’t from a shot. Instead, a ball rolled across the face of goal from Pussetto was well cut out by the 21-year-old, who sprawled to prevent danger.

The Milan goalkeeper was again tasted a couple of minutes later when Gerard Deulofeu found space to shoot on the left edge of the box, but thankfully his effort was straight at the Italy international.

Milan’s first chance came in the 10th minute as a teasing ball from Leao on the left found Saelemaekers inside the box, but the Belgian could not divert his volley goalwards with the ball instead glancing off his foot and wide of the far post.

In the 18th minute though, the Rossoneri did take the lead. In truth the goal was made by Zlatan Ibrahimovic; the Swede taking the ball down brilliantly inside the box and holding off his man before rolling the ball into the path of Franck Kessie who thundered his effort in off the crossbar from the penalty spot.

Deulofeu had another chance to score against his former employers not long after the goal as the Bianconeri outnumbered Milan on the counter, however the Spaniard fired well over when fed with a through ball on the left wing.

The game then slowed down in pace and became quite scrappy with not much quality on display from either side, but Udinese did have appeals for a penalty waved away just before the break as Okaka thought he had been fouled by Ibrahimovic while trying to pounce on a loose ball, though the replay showed that it was more just incidental contact.

Two minutes into the second half though, the home side were awarded a spot kick, and like the Roma one on Monday night it was a real head scratcher. Pussetto went down in the box under a challenge from Romagnoli but it seemed that the Milan captain clearly got a touch on the ball, however VAR was not consulted and De Paul thumped the penalty past Donnarumma.

Ten minutes into the second half Milan had their own penalty shout as a counter-attack ended with Kessie’s shot being blocked  into the path of Ibrahimovic who was clattered by Musso, however the striker was in an offside position.

A double change followed immediately after as Bennacer and Saelemaekers made way for Sandro Tonali and Brahim Diaz, but it didn’t seem to have a great deal of impact as both teams became very scrappy in their play.

With 20 minutes to go Pioli made two more changes to try and force the game a bit more, with Diogo Dalot and Ante Rebic coming on for Calabria and Rafael Leao.

The chances for both teams completely dried up, with the only shot on goal after the substitutions up until the 80 minute mark being a De Paul effort that was way over the bar when he could and should have done better.

Just as it seemed that the game was meandering towards a 1-1 draw, Milan found a second goal. A ball into the area caused panic as it dropped on the edge of the six yard box, and Musso’s indecisiveness cost him as Ibrahimovic was on hand to finish with a bicycle kick of sorts.

Pioli made one more change in the final few moments to try and close the game out, with Calhanoglu making way for Rade Krunic.