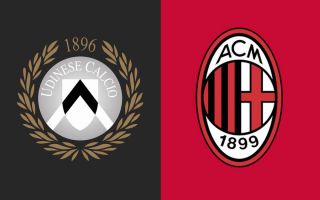 Impressive away record and a bogey scorer: All the key stats ahead of Udinese vs. Milan

This evening, AC Milan will face Udinese away from home in the 17th round of Serie A. They are coming off a defeat to Liverpool in the Champions League but also two consecutive wins in the league.

It will be an important game for the Rossoneri, not just to regain confidence, but also to stay at the top of the standings. Atalanta are in fourth place and are just four points behind, which says a lot about the Scudetto race.

Claiming all three points and returning to winning ways could thus be very important for Stefano Pioli and his men, who are battling with many injuries. You can read our match preview here, while below are the best pre-match stats…

➤ Milan are the side against which Udinese have drawn the most Serie A meetings: 34 draws in 92 matches (W17 L41).

➤ In the last seven Serie A meetings between these two sides played in Friuli, Udinese and Milan have never repeated the same result in two successive games: three home wins, one draw and three away wins, including the most recent one, in November 2020.

➤ Udinese have drawn six of their 10 Serie A games since October, more than any other side in the competition: in the process, only Brighton and Hove Albion (seven) have drawn more than the Bianconeri in the ‘top five’ European Leagues.

➤ Udinese have drawn three of their last four Serie A home games, as many as they had in the previous 14 such matches in the competition (W4 L7).

➤ Milan have picked up 38 points after 16 Serie A matches, their best tally at this stage of the competition since 2003/04, which remains the only campaign in the three points for a win era in which they have collected more than 40 points in the first 17 top flight games of a season (42).

➤ Milan have had 14 different scores in Serie A this season: only Chelsea (16) have had more so far in the Big-5 European Leagues – the Rossoneri have had 16 in the whole 2020/21 campaign.

➤ Udinese’s Gerard Deulofeu played his first 17 Serie A games for Milan: the Spaniard is only one goal away from his best tally of goals scored in a single Serie A campaign (currently four goals, as many as he had in 2016/17 for AC Milan).

➤ Rodrigo Becão has scored only two Serie A goals, both against Milan: in August 2019 he led Udinese to victory whilst in March 2021 he scored the first goal of the match, which was eventually drawn thanks to a 97th Kessié’s goal from the penalty spot.

➤ Brahim Díaz has delivered an assist in his last two league matches: he has never had a hand in a goal in three Serie A matches in a row.