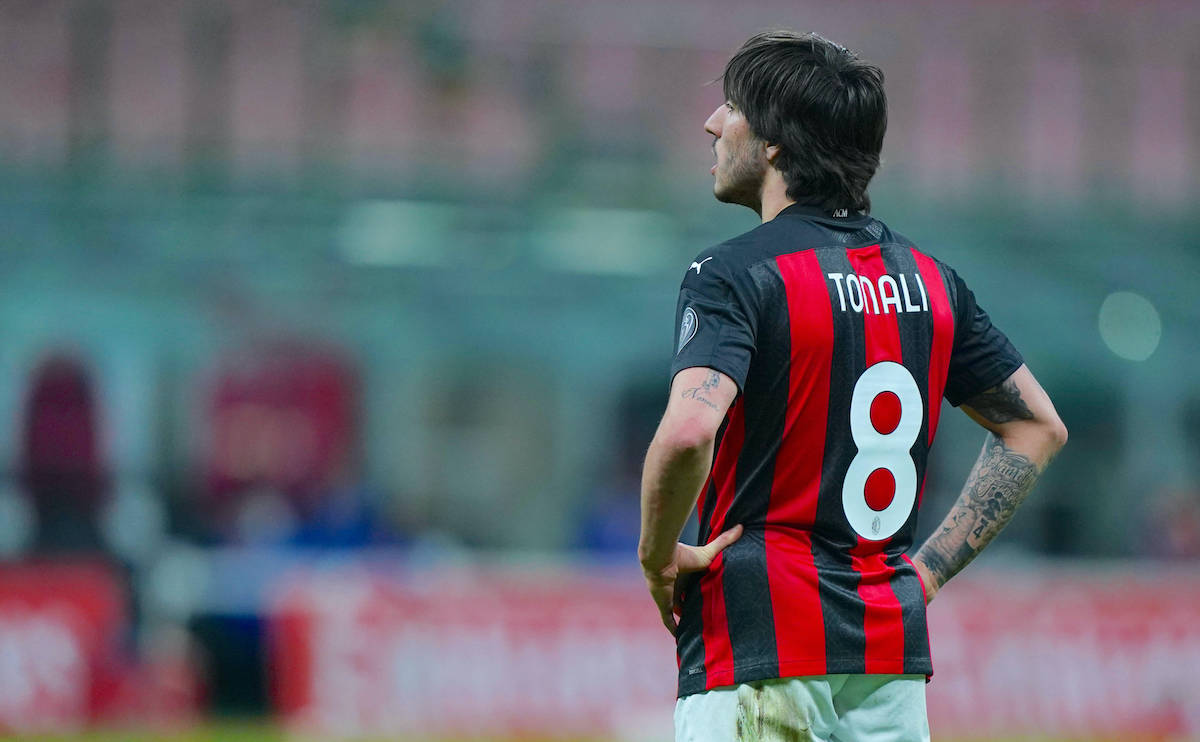 A number of different sources are reporting that Milan and Brescia are negotiating over Sandro Tonali’s option to buy fee being lowered, which could in theory jeopardise the deal.

Tonali had a very mixed season in terms of form and there are good arguments from his supporters and his doubters alike on whether he is a good fit for the team or not. Here, we take a look at a few reasons as to why Milan should redeem Tonali…

Tonali is one of the youngest and brightest prospects in Italian football. Finishing 13th in the Golden Boy awards list in 2019, Tonali had high expectations when he finished the 2019-20 season at Brescia. There was a derby in the market for the youngster and finally his boyhood club Milan snapped him up.

While Tonali was used in a 4-3-3 by coach Corini at Brescia and was the undisputed starter, Milan played a 4-2-3-1 and he had competition in the form of Kessie and Bennacer. The roles differed vastly, at Brescia – playing as a Regista – Tonali was flanked by two Mezzali and they shared the defensive burden.

At Milan, Tonali played in a double pivot where Pioli used him as the deep-lying playmaker along with duties of maintaining a narrow second line of defense as well as pressing opponents. This exposed him to much more than usual in terms of duties and at his age it was a bit too much. However as the season progressed we could see that Tonali was settling into the role more until injuries hampered his season and Meite was started to be preferred by Pioli.

One of Tonali’s distinctive traits at Brescia was to play penetrating pass that would split the lines. We got quite a demonstration of this against Lille when Tonali played on Rebic for his eventual assist for Castillejo. His ability to generate passes at certain angles are also an asset.

We mentioned earlier how Tonali slowly grew into his role. One example of how he was good for acting as a DLP or even helping to bring the ball out from the back was when Kalulu was pressed by Cagliari front three. Tonali easily acted as a third passing option and helped Milan beat the first line of press before he went on a run to beat his marker.

Modern footballers are extremely quick and most of the sprint speeds are recorded by forward players or the full-backs. For a defensive midfielder Tonali has recorded one of the quickest sprint speed in Serie A against Fiorentina when he recorded 35.03 km/h. This data shows how, athletically, Tonali has very sound physical ability.

When naming a 23 man squad, every team are expected to field 8 homegrown players. According to UEFA, homegrown players are defined as those who have spent three years in the relevant club’s country (in this case it is Italy) between the ages of 15-21.

With Milan having lost Donnarumma and the futures of Mattia Caldara and Alessio Romagnoli in limbo, Milan would need to fill the quota with Primavera players. With Tonali Milan can have a quality addition to the homegrown quota that can compete in the squad.

Maldini in the past has spoken about how players are asked to make an economic sacrifice when signing for Milan owing to poor finances and FFP issues. The “will” of the player is paramount in these situations and given that Tonali has been a fan of Milan since his childhood and the player wants to be part of the club in its resurgence, that could be a key factor.

While we can only qualitatively speak about the player, the fans cannot speak on the financial situation of the club and it is only something that the people in power can handle.

The prowess of Maldini, Massara and Gazidis in the market in making the squad competitive with small investments has shown the tifosi that Milan can be great again. As a fan we must trust their position, but there is certainly reason to stand by Tonali.