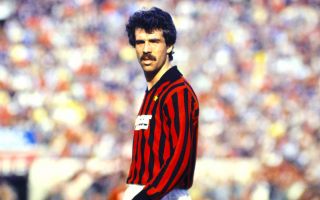 The newest instalment of this series is going to cover one of the most under-appreciated profiles in the history of the club, Pietro Paolo Virdis.

Virdis was one of the main catalysts in the transformation of AC Milan from a struggling Serie A side in the early 1980s to the dominant side that conquered Europe by 1990.

The career of Virdis started with his hometown club in Sardinia for Nuorese who were in Serie D at the time. Having scored 11 goals at the young age of 16, he was immediately picked up by Cagliari to play at a much more elite level of Serie A alongside Italian legend Gigi Riva.

However at this point, Riva was far beyond the peak of his career and the duo was unable to avoid relegation for the Rossoblu. Despite the relegation, Virdis remained at the club and was allowed much more playing time while also scoring 18 league goals.

Following that breakout season Virdis was approached by Juventus but the player declined stating his intentions to stay at Cagliari. However Juventus president Giampiero Boniperti kept on insisting with the Italian striker until he eventually accepted the offer.

The long negotiations weren’t taken lightly by Juventus fans who never truly accepted Virdis for having rejected them initially and the forward himself found it hard to adapt with the new club. Despite the hardships, he would get his first taste of silverware with Juventus winning two Serie A titles.

The Bianconeri eventually sent him on a season long loan back to Cagliari to help him find his lethal form once again but unfortunately this did not work. After the league winnning 1981-82 season the Bianconeri gave up on Virdis and sold him to Udinese in order to replace him with Paolo Rossi.

The move to transfer Virdis to Udinese was appositive one for his career as he would eventually recover with the Friulani in his two seasons at the club between 1982 and 1984. During this period Milan were also in a similar situation as Virdis having recovered from the Totonero scandal of 1980 but now stuck as a bottom table club needing to find the right elements to complete their comeback to the top of Serie A.

The change of pace would eventually come with the arrival of Nils Liedholm as coach. Liedholm – a former Milan legend himself and part of the iconic ‘Gre-No-Li’ line – would be pivotal in bringing the club back to its former glory.

The then Milan president Giuseppe Farina was the catalyst in joining the paths of Milan and Virdis in what was instantly a successful combination. Virdis would finish his first season as top scorer of the club scoring 13 goals in all competition and guiding the team to a much more respectable 5th place.

In the following season the club would be acquired by businessman Silvio Berlusconi to commence an era that would be the most successful in the club’s history. However, as a result of the new investments Virdis would have to compete for his position as the starting striker of the Rossoneri.

During the 1985-1986 season Virdis would have to battle against Paolo Rossi, the same striker who replaced him at Juventus but due to several injuries the Italian World Cup winner was unable to beat Virdis for the starting role and was sold at the end of the season.

The 1986-87 season was the most prolific in Virdis’ career on a personal level scoring 17 league goals to confirm himself as the Serie A top goal scorer. The club’s performances were not so impressive however finishing in 5th place, a position that was not considered adequate by the new Milan owner.

The following season would see several changes in the Milan club with the arrival of new coach Arrigo Sacchi and the signing of Dutch international Ruud Gullit and Marco Van Basten. With the arrival of the new duo many feared that Virdis would no longer get sufficient playing time.

However, due to several ankle injuries suffered by Marco van Basten during the season, the Italian striker was called in to help the club compete for the league title against Napoli. Virdis made a significant impact at the end of the season scoring 5 goals in the last 5 league games including goals against Inter and Roma and a brace against Napoli led by Diego Maradona. These goals helped the club edge past their rivals and win the first league title in 8 years.

As many expected, Van Basten eventually took over Virdis’ role in the starting lineup but despite the reduced number of minutes Virdis remained productive during the 1988-89 season scoring 14 goals in all competitions and contributing to the club’s first UEFA Champions League title in the Berlusconi era.

Unfortunately the summer signings of Daniele Massaro and Marco Simone (who we discussed in our first feature) meant that there was little space for the now-32-year old striker. Prior to his retirement, Virdis spent two seasons with Lecce scoring 8 league goals.

Despite scoring over 100 Serie A goals and winning three Serie A titles and one UEFA Champions League title, it should be noted that Virdis never got the opportunity of playing for the senior Italian national team but only featured for the Olympic team during the 1988 Seoul games.

In spite of the level of competition that he faced throughout his career, Virdis never shied away from the pressure, stepping up when the club needed him most and he tested his limits at every point of his Milan career.

Want more Milan? Check out our podcast page and sign up for notifications on our website for the latest Rossoneri updates!