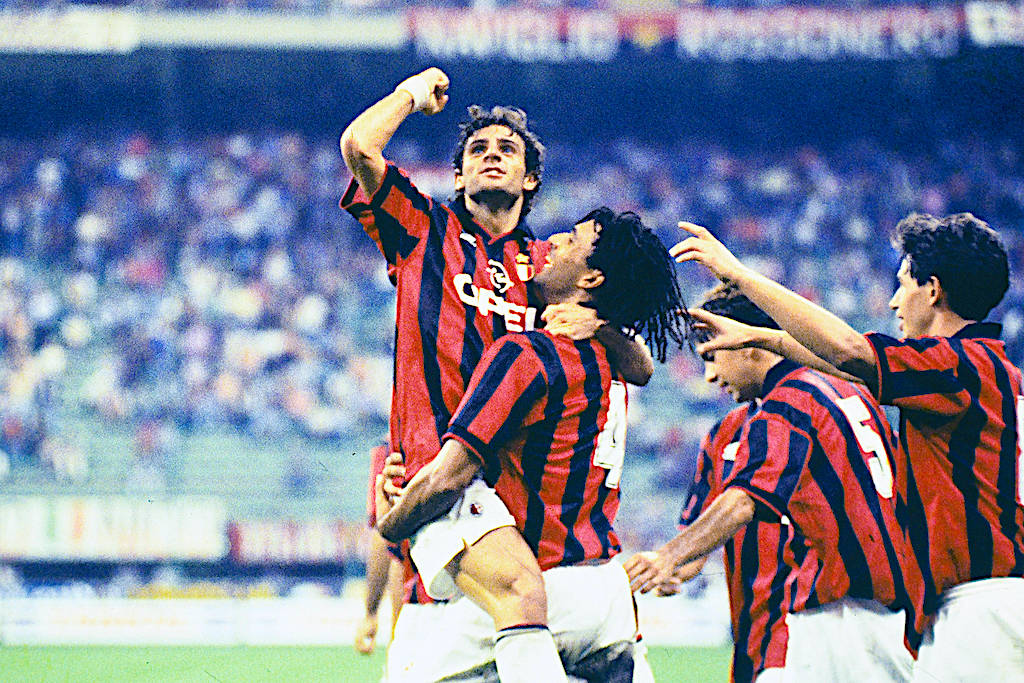 Unsung heroes in the history of AC Milan: Part One – Marco Simone

AC Milan have a long list of players that have contributed to its success over the club’s 121-year history. Some of these well-known players include Paolo Maldini, Franco Baresi and Marco Van Basten just to name a few.

These legends have overshadowed the legacy of other great players were able to wear the red and black uniform and have also stamped their mark on the Rossoneri’s illustrious and rich tapestry. In this new feature series, we are going to look into the history of these obscure profiles to understand better how impactful were their contributions towards the history of the club.

The first profile that we are going to discuss is Marco Simone. who featured for Milan between 1989 and 1997. Playing as a second striker next to Marco van Basten, Roberto Baggio and George Weah, Simone always had an uphill battle to gain the affection of the Rossoneri fans.

Despite the elite level of competition, his ability to create chances and beat his opponent with pace ensured that he got the playing time that he deserved, finishing his Milan career with 260 games and 75 goals. Another contributing factor to his substantial playing time was also his versatility, being able to play as a main striker and winger due to his finishing ability and pace.

Simone started his Rossoneri career as a rotational player between 1989 and 1994, struggling for continuous playing time due to the presence of the aforementioned Van Basten and Daniele Massaro.

Nevertheless, Simone was still an effective rotational player helping the team to win three consecutive Serie A titles between 1992 and 1994, whilst also winning two UEFA Champions League trophies in 1990 and 1994.

In the 1994-95 season, Van Basten suffered an injury that put him out for the rest of the season and eventually ended his career at the age of 31, and Simone was the player chosen to replace the Dutch legend.

In that season Simone scored 17 goals in 30 league games with Milan finishing in an inadequate fourth place in the league table, but redeeming themselves with a positive UEFA Champions League performance ultimately finishing in second place, losing the final to Ajax in Vienna.

The following year, the Milan management wanted to reaffirm its dominance over Italian football by adding Roberto Baggio and George Weah to the squad. Simone was again relegated to a rotational role but at the end of the season Milan was once again at the helm of Italian football, winning the league ahead of Juventus.

Following an abysmal 1996-97 season by AC Milan, Simone left the club to move abroad to PSG where he won two domestic trophies and a Ligue 1 Player of the Year award in 1998.

After a switch to Monaco, the Castellanza-born forward returned for a brief and uneventful second spell at Milan which marked the beginning of the end for his career. Simone eventually retired in 2006 at the age of 37.

In 2011 Simone returned to football as a manager for Monaco but was never able to show the same level of impact as he did as a footballer, ultimately going through seven clubs in nine seasons.

While his legacy might not be the most distinguished in comparison to many club legends, die-hard Milanisti that were able to witness firsthand the impact of Simone on the pitch can attest to his importance for the Milan side that dominated world football in the late 80s and 90s.

Ultimately though, his four appearances for the Italian national team are another reminder of how this huge talent never got the attention it deserved. A true unsung hero, and a fitting way to start.