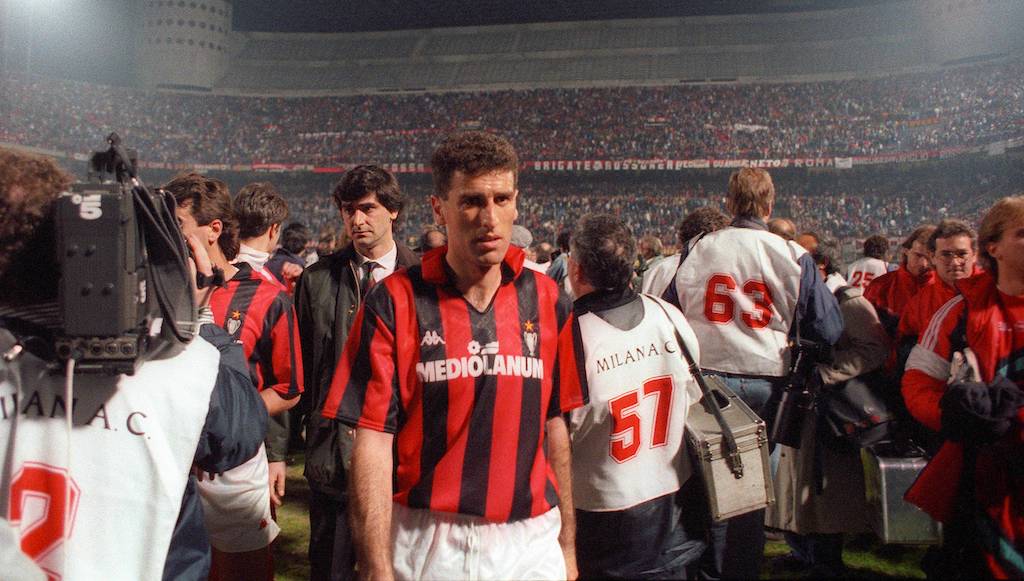 Most Milan fans born in the 1990s will probably remember Mauro Tassotti as the right hand man for AC Milan’s recent success between 2000 and 2010. What some may not remember is that Tassotti was one of the key elements in rebuilding the club following the Totonero scandal in 1980.

Born in Rome in 1960, Tassotti was introduced to professional football through the youth ranks of Lazio ultimately getting his first team debut in the 1978-79 season. Tassotti was recognized as an ‘old school’ aggressive full-back in line with the defensive nature of Italian football at the time.

The Totonero scandal occurred one year later when Tassotti had established himself in the Lazio starting eleven and the club was relegated to Serie B along with Milan as a consequence.

In the summer of the scandal Tassotti transferred to Milan and was given the starting position immediately due to the relegation. Despite the relegation, the Rossoneri were able to retain many key players such as Aldo Maldera, Roberto Antonelli, Franco Baresi and Walter De Vecchi and the team was promoted immediately while also winning the Serie B title.

The road wouldn’t be so plain sailing however as the 1981-82 season proved. A long absence for Franco Baresi along with several disagreements between the players and the new coach was fatal to the team’s performance.

New striker Joe Jordan (the same guy who Gattuso nearly head-butted in a Champions League tie against Tottenham in 2011) proved unable to have an impact only scoring two goals in 22 appearances as the club was relegated for the second time.

The second relegation was impactful to the Milan squad as several key players such as Maldera, Antonelli and Collovati left the club but the club did retain young core members such as Alberigo Evani, Tassotti and new AC Milan captain Franco Baresi.

During these difficult seasons, despite certain criticisms from fans that Tassotti was not good enough for a big club he continued to develop and show loyalty to a club that was in its toughest moment in history. The club would eventually stabilise itself once again among the Serie A teams and Milan would bring back former Milan legend Nils Liedholm to manage the club in 1984.

This period was very beneficial towards Tassotti’s career as he was able to develop his technical abilities much further to the point where the full-back was being compared to Djalma Santos who was considered as one of the best full-backs in history.

By the end of Liedholm’s reign, the squad was once again among the top names in Italian football despite not yet winning the league title since its return to the top flight.

However, the team was now filled with many names who would go on to make history at Milan such as Paolo Maldini, Filippo Galli and Daniele Massaro among others such as Tassotti who remained at the club from the Serie B seasons and were still among the starting lineup.

The Liedholm era paved the way for Arrigo Sacchi to bring in his attacking philosophies that would change Italian football. In the first season under the management of Sacchi, Tassotti formed part of one of the greatest defensive lines in football history alongside Maldini, Baresi and Costacurta.

AC Milan’s success did not stop after Sacchi left and during the first season under the management of Fabio Capello, Tassotti would form part of the ‘Invincibles’ team of 1991-1992 that would the league without losing a single game.

However, the highlight in Tassotti’s career occurred in the UEFA Champions League final of 1993-1994. Milan had already won the league title during that season but the UEFA Champions final seemed to be a difficult goal due to the injuries to Marco Van Basten and Gianluigi Lentini while also having captain Franco Baresi and Alessandro Costacurta suspended.

The team seemed to be in disarray and to make things worse the club’s opponent in the final was Barcelona led by Johan Cruyff. The Barcelona team included Pep Guardiola, Hristo Stoichkov, Ronald Koeman and Romário.

Tassotti had been the club’s vice-captain and therefore took the captain’s armband in the absence of Franco Baresi. The game started off quite well for Milan in the first half and assists from Dejan Savićević and Roberto Donadoni allowed Daniele Massaro to score a brace before half time.

The quality of the opponents was not to be underestimated however and many knew that the game was still not over. The Milan side put the game to rest in the second half following a brilliant goal by Savićević and another goal by Desailly ten minutes later. Due to the absence of Baresi, Tassotti was called upon to lift the club’s fifth UEFA Champions League title in an image that will definitely last forever.

One statistic that is surely underrated in Tassotti’s career is the number of national team appearances. He only appeared 7 times for the Italian national team and all the appearances came between 1992 and 1994 under the management of former Milan coach Arrigo Sacchi. Despite the lack of appearances, Tassotti was able to represent his country during the 1994 World Cup where Italy finished in second place behind winners Brazil.

Mauro Tassotti retired in June of 1997 alongside his long-time defensive partner Baresi following 17 full seasons wearing the Red and Black jersey. Immediately following his retirement, Tassotti was put in charge of the AC Milan Primavera squad and held this position until 2001.

During this period Tassotti was able to win the Viareggio cup which is the major cup competition for all youth sides in Italy. In March of 2001, the club sacked manager Alberto Zaccheroni and hired Cesare Maldini to replace him on a caretaking basis.

This partnership would last until 2009 when Ancelotti left to join Chelseab ut during this period Milan would enjoy two Champions League successes in 2003 and 2007 while also winning the league in 2004. Tassotti was retained as an assistant manager at AC Milan until 2015 and worked alongside several managers such as Leonardo, Massimiliano Allegri and Filippo Inzaghi.

Tassotti would leave the club in 2016 after 36 consecutive years working in the AC Milan organization as player, assistant manager, caretaker manager and scout. He would go on to join former Milan striker Andriy Shevchenko as his assistant manager for the Ukraine National Team.

His role as an assistant manager throughout the years is also a symbol of his playing career where despite not being the most popular element in the side he was always ‘The Professor’ working loyally behind the scenes to ensure that the Rossoneri remain the pinnacle of football.