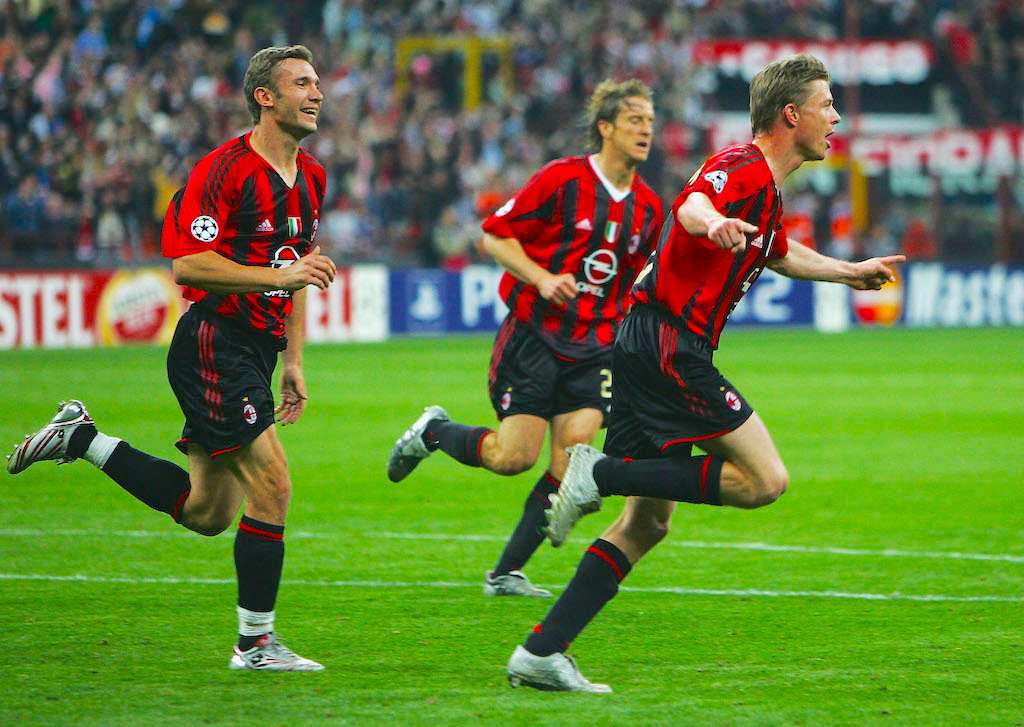 Following the last feature profiling the career of Marco Simone and his contribution towards the success of AC Milan between 1989 and 1997, we take a look at a more recent profile who despite only spending three years at the club still contributed heavily to the club’s history and success.

This time we are going to talk about the Danish striker, Jon Dahl Tomasson. Tomasson’s rise to fame started in 1998 following his transfer to Feyenoord from Newcastle United where he failed to make the desired impact.

He helped Feyenoord to win the Eredivisie league title in his first season and after having three more positive seasons he was also able to win the UEFA Cup in 2002 which was the equivalent of the Europa League at the time.

Following the 2001-02 season, Tomasson decided to explore free agency after deciding not to sign a new contract with the Rotterdam club. Tomasson joined the Denmark national team for the 2002 World Cup and finished the competition scoring 4 goals in 4 games while Denmark made it to the Round of 16 before losing 3-0 to England.

His club and international performances turned heads and Milan recognised the potential of the Danish striker and picked him up to increase the depth available to coach Carlo Ancelotti. While he struggled for significant game time in the league, Tomasson was able to play a huge part in Milan’s Coppa Italia win scoring 4 goals in 7 appearances.

However, the highlight of the 2002-03 season was undoubtedly the UEFA Champions League win over Juventus. Tomasson contributed significantly to the team’s success in this competition, scoring 3 goals in 10 appearances bringing to an end a very positive season.

During his second season, Tomasson’s playing time increased following the departure of Rivaldo. Milan dominated the 2003-04 league season due to the breakout of Kaká and Shevchenko’s league-leading 24 league goals. However, Tomasson was the second top-scorer for AC Milan with 12 goals with some of the most important being against Juventus, Inter and Parma.

These goals were vital in reassuring that the Scudetto that season would go to Milan, and legendary commentator Carlo Pellegatti would nickname Tomasson ‘The White Scorpion’.

The 2004-05 season would be positive neither for the player nor for the club itself. Milan signed Hernán Crespo on loan during the summer transfer window in a move that certainly wouldn’t help Tomasson’s game time.

The Argentine striker would prove helpful during the season scoring 17 goals in all competitions and securing the starting role alongside Shevchenko for most of the season. Tomasson’s role was in consequence relegated to that of a late substitute but the Danish striker still managed to score 9 goals by the end of the season.

Milan finished the league in second place behind Juventus and lost the infamous UEFA Champions League final to Liverpool in a game that both sets of fans will remember too well.

In the following season Milan signed Inter legend Christian Vieri while also recovering Filippo Inzaghi due to injury. At this point the Milan management realised that there would be no point in keeping Tomasson around and sold the striker to Stuttgart for €7.5million.

After two negative experiences at Stuttgart and Villarreal, Tomasson returned to Feyenoord, the club that made him become what he did. His returning experience was positive despite being 32 and definitely past his peak at the time of signing.

A serious injury in the 2010-2011 season signalled the end for his playing career, but similarly to other AC Milan players of his generation he went into coaching just two years later. Tomasson has managed Dutch club Excelsior and Roda JC while also being Denmark’s national team assistant manager between 2016 and 2020. As of right now he is managing Swedish club Malmö FF and has been able to win the Allsvenskan league title in his first season.

While his achievements and contributions at AC Milan may have gone unnoticed to many, his goal tally for the Danish national team will not be forgotten so easily.

Tomasson finished his international career scoring a record 52 goals in 112 appearances, not bad for a striker who spent so much time playing second fiddle.