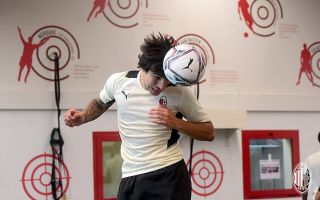 Tuttosport: Upcoming season crucial for Tonali – he must make a leap in quality

Having made his initial loan move from Brescia a permanent deal, Sandro Tonali will be called upon to repay Milan’s faith this upcoming season.

This morning’s edition of Tuttosport (via MilanLive), writes how Tonali must prove that he deserves his place at the club and the number he inherited from Gennaro Gattuso. The young midfielder did not convince overall last season as he alternated encouraging performances with bad ones, but the new season provides an opportunity for a fresh start.

The friendlies against OGC Nice and Valencia – which are next on the calendar – represent a good test for Tonali. The midfielder will be called to play as a starter given the absence of Franck Kessie who is in Tokyo at the Olympic Games, so the Italian will support Ismael Bennacer.

Last year the difficulties of Tonali were understood, given the weight of the shirt and the adaptation to the new formation plus a reduced preseason preparation, but now there will be no more excuses.

In January, Kessie and Bennacer will be missing for a month given their commitment to the African Cup of Nations so Tonali will be called upon to lead the midfield with inspiration and quality. This has to be the season of Tonali.