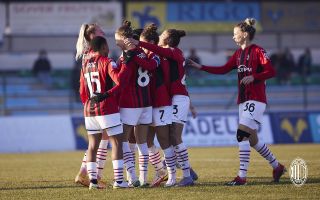 The AC Milan Women beat Hellas Verona by a score of 3-0 on Friday. The win allowed Milan to top Group A and to move into the next round of the Coppa Italia.

Here’s an overview of what happened…

Though AC Milan started well, the first big chance of the game fell to Verona, as Cedeño Valderrama’s eighth-minute strike hit the post. Valderrama had another chance a few seconds later, but they also failed to convert that chance.

After that, the Rossonere began to gradually assert themselves and would eventually find the breakthrough. Lindsey Thomas would get on the board at around the 30th minute. Her lucky shot found the back of the net via a deflection.

The Rossonere continued to ramp up the pressure, as Miriam Longo had two chances at the 35th and 42nd minutes. Sadly, neither were converted. The Gialloblù’s goalkeeper, Fanny Keizer, did well to parry both of Longo’s chances. also denied Thomas (38’) and Stapelfeldt (44’) in the closing stages of the half.

Milan then started the second half well as, in the space of five minutes, put the game to bed. Lindsey Thomas bagged her second of the match at the 47th minute after pouncing on a mistake from Keizer. Three minutes later, Jane got in on the action and scored at the 50th minute.

The Rossonere continued to dominate and came close to adding a fourth through Tucceri Cimini on two separate occasions: first at the 62nd minute and then at the 67th minute. Neither of those shots were converted.

A few minutes later, the final whistle was blown. The Rossonere would emerge the victors of the match and will be in the next round of the Coppa Italia.

AC Milan will go on hiatus for the winter break. Then they’ll return on January 5th to play AS Roma in the Supercoppa Femminile. Kickoff time will be 14:30 CET.