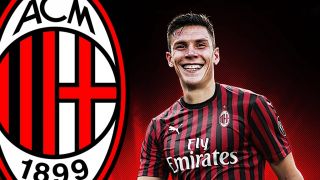 Versatility, quality and value: Why Pessina is a no-brainer signing for Pioli’s Milan

Former Rossoneri youth player Matteo Pessina has excelled for Hellas Verona and would be a precious resource for Stefano Pioli next season.

Rarely does a rumoured transfer make as much sense as Milan’s reported interest in Matteo Pessina.

Pessina was of course on Milan’s books before his sale to Atalanta as part of the deal for Andrea Conti. He was always touted for big things, but had to wait until this season for his big breakthrough – pitching in with an impressive 7 goals in 32 appearances for Verona so far this campaign.

Now 23 years old, Pessina looks set to move again this summer, either back to Atalanta who hold a buy-back option, or to one of the many big clubs keeping a keen eye on him. Among the interested suitors are Milan (as per numerous sources), who are reportedly in a position to take advantage of an advantageous sell-on clause to secure Pessina at around 40-50% of his market value. This is rumoured to be around €15million, meaning that Milan could buy Pessina for a figure in the vicinity of €7-8million euros.

At this price, nobody at the club should hold any reservations about making this deal happen.

Pessina has primarily been deployed as a right-sided attacking midfielder under Ivan Juric, a position that makes the most of the genuine goal threat that he offers. He has also been used in a deeper role, where he can mix his impressive work rate with a keen eye for an incisive pass.

He could conceivably be used in a number of positions in Pioli’s preferred 4-2-3-1 formation, be it as a more than capable deputy to Kessie or Bennacer, as well as anywhere in the attacking midfield three. He would offer something different off the bench, and potentially grow into a starring role in the years to come.

There will be competition for Pessina’s signature, and understandably so. Forward thinking, young, attacking players are a hot commodity in Serie A and Pessina will be no exception.  It shouldn’t be forgotten that he has one less Serie A goal than Dejan Kulusevski, who was sold to Juventus for €35million in January.

For all the talk of Sandro Tonali, Luka Jovic and other big name additions, it would be shrewd business by Milan if they were to push through a deal for Pessina come the end of the season. For his age, talent and what he would offer Pioli, there won’t be a better value or lower-risk signing on offer.