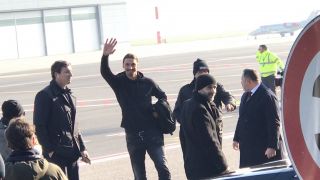 Zlatan Ibrahimovic has arrived in Milan. At Linate, the 38-year-old was greeted by Zvone Boban, as well as many fans that had gathered outside the airport. It’s safe to say that they were thrilled.

After stepping off the private jet, following a short conversation with Boban and the club’s Media Officer, he headed straight for the car to leave the airport.

However, this certainly wasn’t easy as the fans more or less blocked the exit. Now, the Swede will have the usual medical tests at La Madonnina clinic, where fans have gathered.