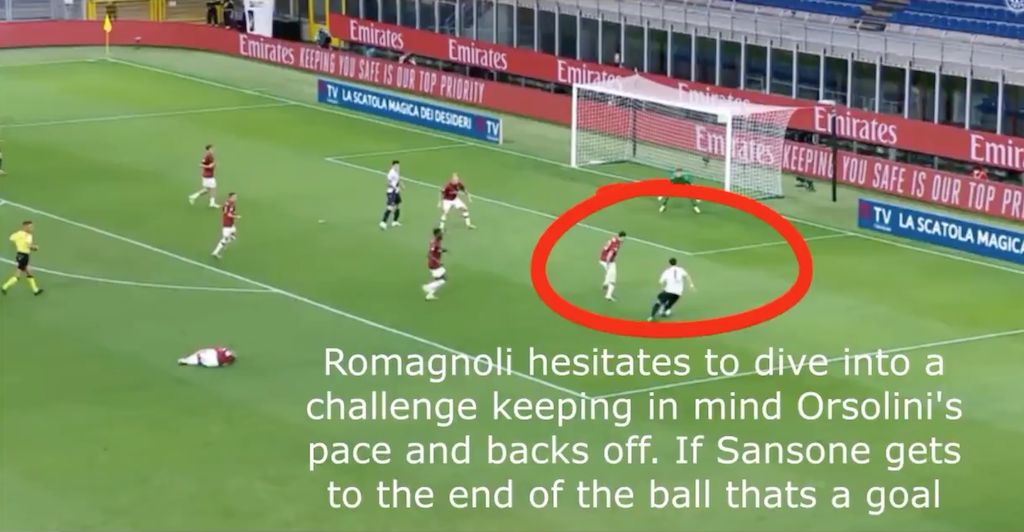 Alessio Romagnoli has come under fire from the media and some sections of Milan supporters for his performances since returning from injury.

In truth the captain does not look to be back to 100% yet, but that could be because he looks off the pace in general and is lacking the sharpness we are used to seeing him possess.

He had another rough night in Thursday’s 3-0 home defeat to Lille, giving away a penalty that allowed the visitors to open the scoring, and our writer Rohit Rajeev has examined some of his shortcomings in the new system…

Alessio Romagnoli has been a rock at the back for Milan and the Rossoneri were looking to sign a long-term partner for him until they got Kjær from Sevilla.

With Milan choosing to play a high line to support the high press, it exposed Romagnoli, who until the days of Gattuso was quite content to sit back and be a last ditch defender. His tackles and his timing as a last ditch defender are close to perfect and with Ricardo Rodriguez covering the flanks, he had the cover from the wing.

With Theo bombing forward and Kessie helping out in attack when the ball goes forward it creates a lot of space. Modern football is all about space. For attackers it is about creating space and attacking space.

As a defender, it is about closing down space and not giving space to attackers. Coaches have analysts use data science to find space and patterns.

Rabiot's goal. Once Theo is beaten it's rinse and repeat from Alessio. Keep backing off and give space, get beaten by pace pic.twitter.com/YoCvUAI7ob

The 5-1 in Bologna is remembered by Milan fans for Milan’s big win and annhilation of the Bologna defence. But shortly after the 2nd goal Bologna threatened Milan quite a lot and even yielded in a goal pic.twitter.com/hT9SKrmDoX

Outside Italy, teams are more attack oriented and possess fast players who press high. This has shown Alessio to be a lot more exposed. One player in Italy who has pace and strength is Lukaku and we saw how Romagnoli struggled against the Belgian.

These incidents are not one-offs like some think, and it looks like Romagnoli has something to work on if Milan are to stop leaking goals.