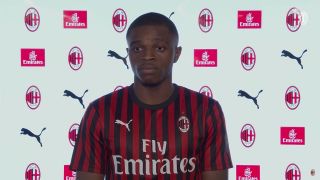 Video: Kalulu reveals why he chose to join Milan and names his biggest strengths

Pierre Kalulu is AC Milan’s first signing for the new season. The young right-back was secured a while back as his contract with Lyon expired, allowing him to sign with the Rossoneri on a free transfer.

In his first interview with the club, which some fans found despite it being unlisted on Youtube, the 20-year-old revealed why he decided to join Milan. He was also asked about various things, such as his biggest strengths on the pitch.

“I’ve chosen Milan because the club showed great interest in me and were unwavering in their desire to sign me, presenting me with a project that got my interest.

“Speed and defensive coverage are my best qualities being a defender, and I consider myself a complete player,” he stated.

Take a look at the full interview below. It remains to be seen if the youngster will fight for a spot on the right flank, seeing as Milan reportedly will sign one more right-back before the season starts.