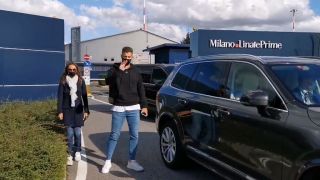 Diogo Dalot is ready to start his adventure at Milan. After the latter reached an agreement with Man Utd, the Portuguese arrived in the city just a few minutes ago to complete the loan move.

The Rossoneri, knowing that there is little time left of the mercato, agreed to sign Dalot on a dry loan without an option to buy. The defender arrived at Linate airport half an hour ago (see the video below).

The 21-year-old, who can play on both flanks, will be useful for Stefano Pioli as Theo Hernandez then could get some rest. It remains to be seen if he will replace Davide Calabria on the right straight away.

READ MORE: Pioli explains why he decided to start Maldini up front against Rio Ave