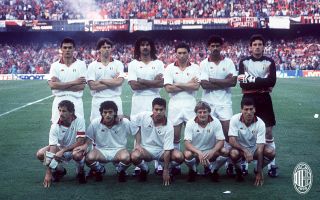 AC Milan have released a video as part of their 120th birthday celebrations looking back at the famous 1989 European Cup final.

The game was held at the Camp Nou in Barcelona, Spain on 24 May 1989, and saw the Rossoneri thrash Romanian side Steaua București 4–0.

Marco van Basten and Ruud Gullit each scored a brace to capture Milan’s third European Cup, with the official record showing 98,000 being in attendance.

Despite this, the video below from Milan’s official Twitter account suggests that 101,000 fans were inside the ground, and Ruud Gullit revealed in an interview that almost 90,000 of them were Milan fans.

Among many stories, this is your story, the story of our fans ❤️️🖤