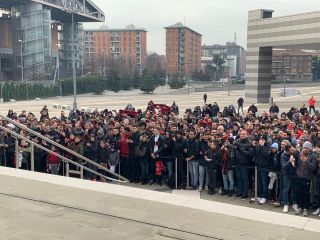 One thing is certain: it may have been a disappointing start to the season, but AC Milan fans have ‘Zlatan Fever’ once again and it has lifted the entire mood surrounding the club.

After the presentation, the Swede went outside the club’s headquarters to greet and acknowledge hundreds of fans who were waiting for him, as seen in the video below…