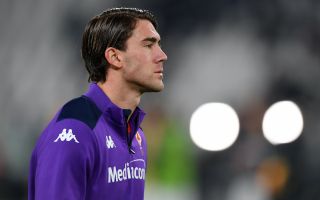 MN: Vlahovic ‘corresponds perfectly’ to Milan’s vision but he remains a dream

AC Milan should not count themselves out of the Dusan Vlahovic race as they have a couple of factors working in their favour, according to a report.

It is now well known that Vlahovic will leave Fiorentina before the expiry of his contract in 2023 as they announced he will not renew his deal. In his latest for MilanNews, Luca Serafini writes that Fiorentina are at an ‘important crossroads’ regarding the future of Vlahovic and will have to make a decision on when to sell him and who to sell him to.

There is already a battle that has emerged among the major European clubs to sign him given he has followed up an excellent breakthrough season by netting 10 in 12 league games so far this season. However, there are ‘a couple of Italian clubs’ who are in the front row.

The profile of the Serbian international ‘corresponds perfectly to the Milanese identikit of recent times’ apart from the potentially high transfer fee. However, the recent news about the potential renewal of Zlatan Ibrahimovic – who is the idol of Vlahovic – could be significant.

There may be other priorities on the market however such as those relating to the midfield and defence, but Vlahovic could be a statement investment.