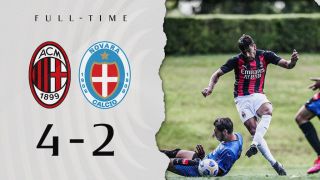 Watch: All the highlights and key details as Milan score four in 30 mins to beat Novara

AC Milan came from 2-0 down against Serie C side Novara to win their first preseason friendly of the summer 4-2.

In what was a game made up of three 20-minute periods, the Rossoneri found themselves two goals down as their visitors scored twice in just over two minutes.

The first was a poorly marked free-kick in which a header back across goal resulted in an easy finish at the back post, while the second was a lovely turn and finish.

It was in the second period that Milan got back into the game at Milanello though, and they soon halved the deficit as Lucas Paqueta finished with composure following a neat link-up between the Brazilian and Zlatan Ibrahimovic.

Emil Roback – who came on after 20 minutes – was instrumental in scoring the second goal as his run ended with a dangerous low ball that Diego Laxalt fired home via the keeper’s glancing touch.

Milan took the lead in the third period through Davide Calabria. Paqueta saw a shot from outside the area rattle off the base of the post, but the full-back followed up into the box and found the bottom corner with a smart finish from the rebound.

The Rossoneri’s scoring was complete a few minutes before the end, and Paqueta got his second of the game. Moments before Roback had the ball in the net but the goal was ruled out for offside, though less than a minute later Paqueta fired home from Laxalt’s cross to make it 4-2.