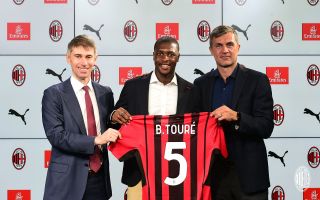 Watch: Ballo-Toure greets Milan fans for the first time after signing – “I am very happy”

Fode Ballo-Toure has issued his first words as a new AC Milan player, confirming his delight after joining the club.

A statement on the club’s official website earlier today confirmed the news reported over the last couple of days by numerous journalists, announcing that defender has signed a contract with the Rossoneri until 30 June 2025.

Through the official Milan Instagram profile , the first greeting from Ballo-Touré to his new fans arrived.

“Hi, I’m Fodé Ballo-Touré, I am very happy and content to be a Milan player. Hope to see you soon at San Siro. Forza Milan!” he said (via MilanLive).