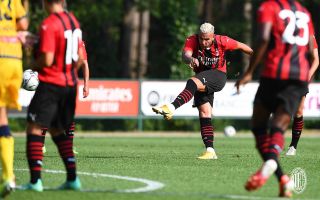 AC Milan were in a destructive mood in their second preseason friendly as they put Serie C side Modena to the sword, beating them 5-0.

It took less than two minutes to open the scoring as some wonderful link-up play between Theo Hernandez and Brahim Diaz saw the former put the latter in behind, and he marked his return to the club with a well-taken goal.

It was 2-0 within five minutes and again Brahim was at the heart of things. He found space on the byline to stand up an inch-perfect cross to the far post, where Rafael Leao arrived late to head home from close range.

It became 3-0 within nine minutes as Fikayo Tomori got his first goal of preseason. Ismael Bennacer whipped in a flat cross from the right side, and the centre-back was on hand to head it inside the right post.

Inside 20 minutes it was 4-0. A precise cross from Leao on the left flank found the head of Rade Krunic, who couldn’t miss arriving at the far post.

A fifth goal arrived two minutes before the break via a well-worked free-kick routine. Bennacer quickly rolled the ball out from under his foot, and Theo Hernandez finished with an absolute thunderbolt.

The XI for the second half was as follows (4-2-3-1): Tatarusanu; Conti, Gabbia, Caldara, Ballo-Touré; Robotti, Tonali; Castillejo, D.Maldini, Hauge; Colombo.

There would be no more goals in the game however, with Lorenzo Colombo, Samu Castillejo and Daniel Maldini all coming close to making it a 6-0 game, as in the end the Rossoneri were forced to settle for five.