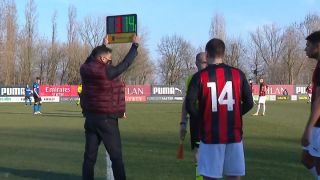 Having arrived on the final day of the January transfer window from Hungarian side ETO FC Gyor, Milos Kerkez has now made his debut for Milan’s Primavera side. And based on the highlights, it sure was promising.

Instead of signing a left-back for the first team, Paolo Maldini and Ricky Massara decided to go with the 17-year-old, knowing he can be a name for the future. And if he performs well, his inclusion in the first team could happen very soon.

Kerkez made his debut for the Rossoneri earlier today as the Primavera side faced Inter. Even though they lost the game, it was a good display personally for the youngster, who looked quite good as you can see in the video below.

🇭🇺 Kerkez made his debut for #ACMilan's Primavera side in the derby against Inter today.