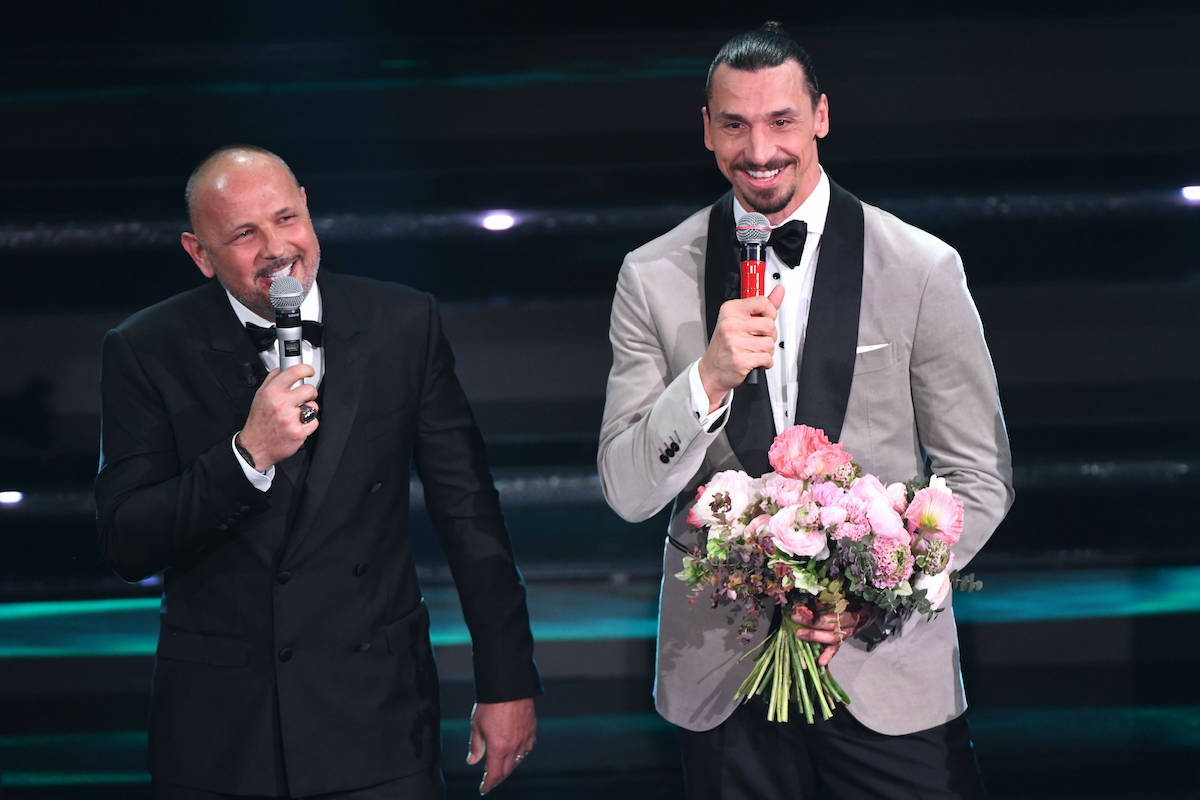 Watch: Ibrahimovic explains how Milan fan took him 60km on motorbike as he and Mihajlovic duet

There was certainly no shortage of drama in Zlatan Ibrahimovic’s third night at the Sanremo Festival as the striker arrived late due to problems on the motorway.

Ibra arrived late for his third night and explained to the presenter the reason for the delay (via GIFN): “There was an accident on the motorway. After three hours in the car I told my driver to open the door to let me out. I stopped a motorcyclist and asked him, can you take me to Sanremo?”

“It’s a good thing he was a Milanista – so for 60km he drove me here. When we got here he told me it was the first time he’d been on the motorway!”

The 39-year-old then got his phone out to show a video of himself on the bike to prove it was real.

The presenter asked: “So where were you last night, Zlatan?”

Presenter: “But there’s so many of us here!”

Bologna boss Siniša Mihajlović came onto the stage to a warm welcome, and the presenter remarked: “You look very elegant Siniša.” Mihajlović responded: “I look like Bond, James Bond!”

Presenter: “So listen, what do you think of my festival?” Ibra: “Excuse me? My festival.”

Ibra actually got a red card for headbutting Mihajlović back when he was at Juventus, so the duo were asked to explain their friendship: “When Zlatan came to Inter I wanted to return the favour. Instead we became friends.”

Mihajlović: “There is one thing that Zlatan envies me for, that he hasn’t won yet.”

Presenter: “Zlatan, who has been your greatest rival?”

Ibrahimović: “I like Paolo Maldini, he was aggressive but always honest. Chiellini is another, there are many.”

Mihajlović: “What he does is sign for the teams where those players are, so he doesn’t have to play them!”

There was then a touching moment as Mihajlović recalled his battle with leukaemia: “I never thought anything of the sort would happen to me, then suddenly from one day to the next my life had changed. I was down for 2-3 days, then I got up and threw out the negative energy and started to think positive.”

Ibrahimovic also spoke about discovering that his close friend was suffering: “When I heard the news, I didn’t have the strength to call him. A few days had passed, and when I called him I wasn’t able to speak, instead it was him reassuring me. It was an experience because usually it’s me giving to others.”

Then, they had a duet…