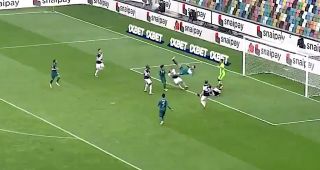 Zlatan Ibrahimovic moved on to seven league goals for the season as he netted a late goal against Udinese to give AC Milan a 2-1 lead.

Just as it seemed that the game was meandering towards a 1-1 draw, Milan found a second goal. A ball into the area caused panic as it dropped on the edge of the six yard box, and Musso’s indecisiveness cost him as Ibrahimovic was on hand to finish with a bicycle kick of sorts.

Below is a replay of the goal…