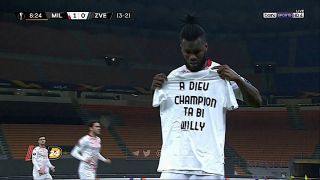 Watch: Kessie nets from the spot and pays tribute to Atalanta youth player who passed away

Franck Kessie gave AC Milan the ideal start in their Europa League Round of 32 second leg against Red Star by scoring from the spot.

The Rossoneri were moving the ball around quickly and it earned them a penalty in the 8th minute with their first meaningful attack of the game. The ball was spread wide to the left edge of the box where a cut-back found Krunic, whose shot clearly struck the arm of Gobeljic’s as it was goal bound.

The referee went and consulted the VAR monitor before determining it was indeed a spot kick, and Kessie made no mistake from 12 yards, sending Borjan the wrong way with a composed finish.