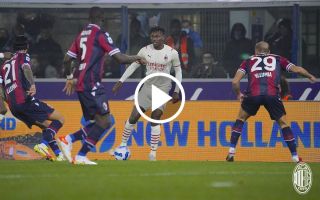 Rafael Leao got his fourth league goal of the season to give AC Milan an early lead against Bologna at the Stadio Renato dall’Ara.

The first goal of the game, despite all the early pressure, went to Milan. A fantastic pass from Ibrahimovic released Leao in behind the Bologna defence and he steadied himself before firing a shot that took a deflection off Medel who tried to block and nestled inside the near post with Skorupski rooted to his line.