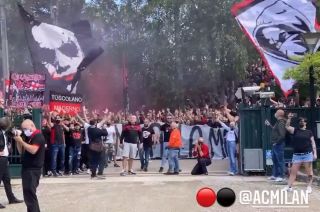 Watch: Milan players applaud the fans as ‘we want this victory’ is chanted

Milan got a nice boost from their fans this morning as many of them showed up at the training ground, just like before the game against Juventus. There were so many that the fans seemed to be in shock.

When the players arrived at Milanello, the Rossoneri fans went crazy and they also made themselves heard when the team bus eventually left for Bergamo. Before leaving, however, the players applauded the fans and listened to the chants.

As captured by Diogo Dalot (see the video below), the fans chanted ‘we want this victory!’ as the players were watching on. Hopefully, the team will satisfy their 12th player this evening.

READ MORE: Pioli relies on speed as Diaz and Leao will be key for Milan vs. Atalanta