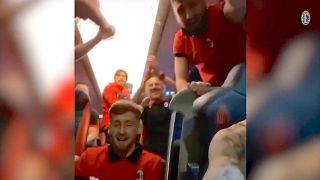 Some more excellent footage has emerged from the celebrations after Sunday’s 2-0 win over Atalanta that secured a return to the Champions League.

A brace of penalties from Franck Kessie was enough for the Rossoneri to beat their rivals from Lombardy and not only seal a spot in the top four and a UCL return for the first time since 2013-14, but also to grab second place. As is perhaps understandable, the players enjoyed the celebrations after the game…

#BackHome
The celebrations continue… on the team bus 🎤🔥