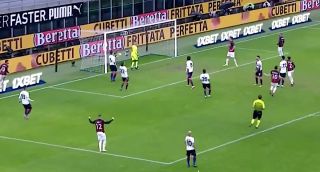 Watch: Rebic and Theo Hernandez combine to give Ibrahimovic an easy brace

Zlatan Ibrahimovic made it yet another brace this season as he scored to widen the lead over Crotone at San Siro on Sunday afternoon.

It was that man Ibrahimovic again who doubled the Rossoneri’s advantage after a dominant opening to the second half. Some nice link-up play between Rebic and Theo set the latter away on the left side of the box, and he squared across the six-yard box where the No.11 was on hand to touch the ball into a virtually unguarded net.

💥 A SIXTH brace of the season in Serie A for Zlatan Ibrahimovic, and what a ball from Theo…pic.twitter.com/NTYsnOrAyI

Ibrahimovic gets another, and it doesn't get much easier than that 🔥

Milan on course to pick up another important win 🔴⚫ pic.twitter.com/7AHUwGJD8z