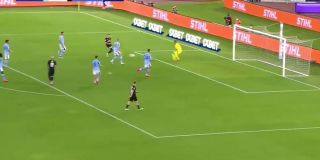 Watch: Rebic continues his red-hot run of form with beautiful finish against Lazio

Ante Rebic continued his amazing run of form on Saturday night as he netted Milan’s third goal of the game against Lazio at the Stadio Olimpico.

Rebic came off the bench at half time and got his ninth goal of the year. Bonaventura showed exceptional awareness on the edge of the box to wait to play an incisive through ball to the Croatian, who took a touch to settle the ball before stroking past Strakosha into the far corner.