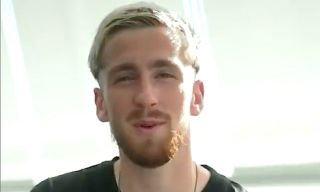 AC Milan winger Alexis Saelemaekers has claimed that Rafael Leao has the potential to win the Ballon d’Or, and crowned his funniest team-mates.

Saelemaekers joined the club from Anderlecht back in January 2020 as somewhat of an unknown quantity but has now established himself as a key member of not only the starting XI but the dressing room as well, forming part of a young dressing room.

Interviewed by Eleven Sport Belgium, Saelemaekers answered several questions relating to his team-mates, with his comments transcribed by MilanNews.

The funniest: “Theo Hernandez is someone who makes you laugh a lot. He’s a little comedian.”

The most pure talent: “Rafael Leao. I have already told him several times that, if he wants, he can win the Ballon d’Or.”

The hardest trainer: “Zlatan Ibrahimovic, without a shadow of a doubt. It is impressive. It doesn’t matter if on the pitch or in the gym, he always gives one hundred percent, Even Theo is one who gives a lot.”

Worst music: “I think the worst music is Rebic’s. Listen to Croatian songs that don’t fit my tastes.”

Worst dancer: “I was about to say, without hesitation, Gigio Donnarumma, but he went away. But I can tell you that I’ve never seen someone dance so badly. Now I would say that the worst is Calabria.”

Best dresser: “Apart from me, of course, I would say that Leao is someone who dresses well”.

Best friend: “I have many, but if I have to name names I would say Theo Hernandez and Olivier Giroud.”