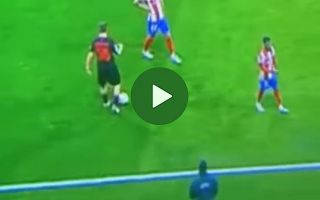 Alexis Saelemaekers might not be in Stefano Pioli’s good books after he hit his coach with what was an incredible bit of skill.

As the referee’s whistle blew the game dead, Saelemaekers decided to flick the ball up and do some kind of spinning back heel that he inadvertently hit Pioli with. Of course we joke about any notion that the head coach might have taken it seriously, but it is nonetheless a pretty hilarious clip to watch.