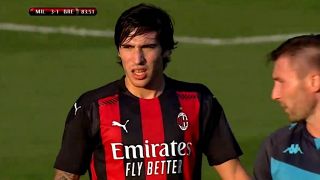 Watch: The highlights of Tonali’s 18-minute cameo as he makes his Milan debut

Something that didn’t even seem like a remote possibility three weeks ago actually happened on Saturday evening: Sandro Tonali made his AC Milan debut.

After confirming his arrival from Brescia earlier in the week, Tonali was thrust into action against his old club during the 3-1 preseason win at Milanello.

Tonali almost scored too with a shot from the edge of the box, and you can see the highlights of his 18-minute cameo below…