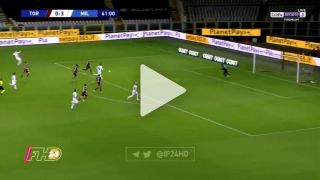 Watch: Milan score three times in 10 minutes to go 6-0 up against Torino

Just minutes after the hour mark, Milan did get the fourth goal that their dominance against Torino fully deserved.

Again it was a devastating counter-attack that carved the home side wide open, with Rebic finding Theo Hernandez’s run in behind perfectly and the Frenchman netting his second of the night with a deft dink over Sirigu.

Torino barely had any time to settle themselves before the scoreline read 5-0. Substitute Rade Krunic – who had just come on for Brahim Diaz – waited just the right amount of time to slide Rebic through on goal and the Croatian finished expertly into the top corner at the near post.

Things got even worse for the Granata with just under 20 minutes remaining as it became 6-0. A fantastic through ball from Soualiho Meite found Rafael Leao in behind and created a two-on-one, with the Portuguese forward unselfishly squaring to Rebic for an easy tap-in and a quickfire brace.