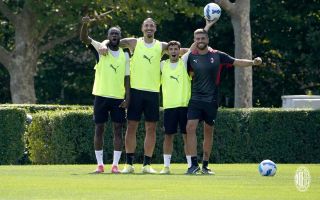 Watch: Tomori explains how it feels to play alongside Ibrahimovic – “It’s like a Maldini thing”

AC Milan defender Fikayo Tomori has revealed what it is like to play alongside a footballing great such as Zlatan Ibrahimovic.

The Englishman joined Milan on an initial loan deal that was made permanent this summer, and there is no doubting that playing with someone as iconic as Ibrahimovic had some kind of influence.

Tomori spoke during a press conference to mark the convening of the English national team for the upcoming World Cup qualifiers, and was asked about Ibrahimovic.

“He’s got such an aura in the changing room and when he’s on the pitch or when he’s not playing you hear his voice and he’s encouraging everyone. He’s a real leader, when he plays it gives everyone a lift, and even though he hasn’t played much this season he’s already scored a goal.

“He’s loved in Milan, and when you have him on the field it’s such a boost for everyone. It’s like a Maldini thing: when he’s playing you want to make sure you’re on top of your game.

“He’s very much an encouraging person. As a defender I’m not always directly giving him the ball but he says ‘make sure it comes to my chest.’ He’s not as assertive or aggressive as people think, he’s a really nice guy.

“Even when we do training games, I remember in preseason we were doing a foot golf game and I was on his team, and I had to make sure I was on my game. He’s definitely a winner, and it’s definitely a transfer to every single person on the them that when he’s on the pitch it’s about winning and about working.”

💬 "When he's on the pitch, it's about winning and about working."