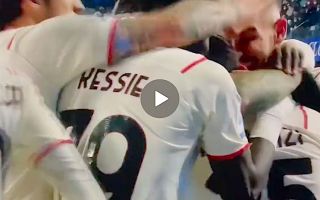 Watch: Tonali repeatedly slaps Florenzi on the head to congratulate him after first Milan goal

There was a hilarious moment during last night’s victory against Empoli as Sandro Tonali chose an interesting way to congratulate Alessandro Florenzi on his goal.

Just after the hour mark, the Rossoneri got their third goal of the match. A dangerous free-kick was conceded by Empoli for a foul on Saelemaekers just over 20 yards out and it was Florenzi who took on the responsibility, firing it through the wall and past a motionless Vicario into the corner for his first Milan goal. Tonali took the chance to congratulate him quite aggressively…

😂 Sandro Tonali making sure Florenzi got his appreciation ❤️️🖤