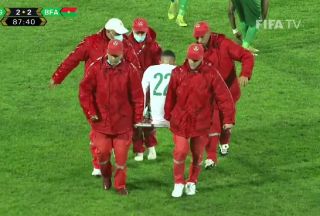 Watch: Worry for Milan as Bennacer is stretchered off in Algeria clash

Ismael Bennacer took part in Algeria’s game against Burkina Faso earlier this evening. The clash ended 2-2 and there was more bad news for the midfield, as he was forced to leave the pitch on a stretcher.

In the 88th minute, the Milan star was subbed off and the official account of Algeria described it as cramp. Seeing as he was stretchered off, however, Rossoneri fans are right to be worried about the midfielder.

Bennacer perhaps wasn’t expected to start on Saturday anyway (vs. Fiorentina), but it would be a blow to have him unavailable for a longer period. Hopefully, it is indeed just cramp.

Update: Bennacer greeted the fans after the game (see photo below), indicating the issue is not serious.

Ismael Bennacer cramping up after a full shift pic.twitter.com/idNfGO1kU8

Bennacer greeting Algeria fans after making the World Cup playoffs after a draw against Burkina Faso. He was subbed off at the 87th minute after a minor muscle cramp pic.twitter.com/0X81ag54km