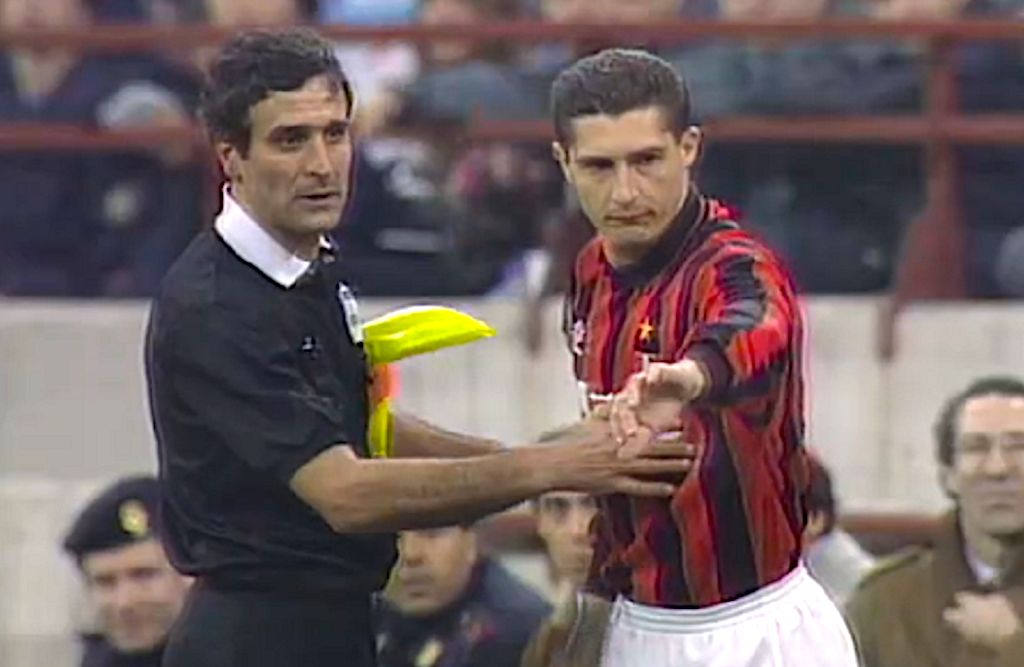 Another one of those special matches is upon us again, as we get set for another instalment of the Derby della Madonnina between AC Milan and Inter.

During these difficult times that are facing our world, these moments in our life make it just that bit easier to forget about our problems, even just for 90 minutes. But of course, matches against Inter are never just about the 90 minutes, are they?

The derby takes place this Saturday at 18:00 CEST and chills are in the air – not just because it is autumnal in northern Italy either.

We go back to the early 1990s, a time when the Rossoneri were experiencing a particularly prominent period in their history. Fabio Capello was the manager, the team was laden with world class players in every position and the trophy cabinet was bulging.

Derby dominance was also high on the agenda, as the teams got set to face off on Sunday 20th March 1994. Heading into the match, Milan were unbeaten in eight games against their fierce rivals and that particular game would be filled with its fair share of drama.

In those days, clubs in Italy were only allowed three foreign players and while il Diavolo had a plethora of talent, the “fortunate” three chosen by Don Fabio were Marcel Desailly, Zvonimir Boban and Dejan Savicevic. Interestingly enough, these would be the same trio he would use in the Champions League final vs. Barcelona later that season, that ended in a resounding but also astonishing 4-0 win.

Il Biscione’s three starts at the time were Igor Shalimov plus the Dutch pair of Wim Jonk and Dennis Bergkamp. Both teams were captained by two absolute legends of Milanese football, with Franco Baresi for the red & black and Guiseppe Bergomi for the blue & black. It was a derby of true superstardom.

Milan as the designated “home” team that the two rivals shared had the majority of fans at San Siro and played as such. They pressed the ball whenever Inter had possession, moved the ball quickly and tried to get ‘Il Genio’ Savicevic and strike partner Marco Simone involved as often as possible.

A particular match-up that had been keen to witness was that of Savicevic and Bergomi. The Nerazzurri captain stuck to the Montenegrin like glue to wood and would not let him out of his sight for most of the match, so much so that before even 15 minutes had elapsed he had fouled Milan’s number 10 three times.

The gauntlet had been sent down to Milan’s attackers. The Rossoneri were not going to be outdone in the derby and whenever the Nerazzurri dared come near their penalty area, or in fact the center circle, the likes of Demetrio Albertini and Marcel Desailly were there to snuff out any danger.

Again, it seemed a prelude to Athens later in the season. Whenever Savicevic was marked, there was always one Boban to step up and display his attacking talents. He did just that near the 20th minute, as he dribbled around a couple of defenders and sent a peach of a cross that Simone came close to getting on the end of. Pressure was building.

However, Inter would make the odd inroad of their own and it was Bergkamp who found himself with a one-on-one with Sebastiano Rossi near the half hour mark, which thankfully was saved.

What was noticeable as the match progressed was how Inter kept dropping back further and further. Milan’s defenders virtually had their entire half to pass the ball around with little to no pressure from the opposition.

It meant Milan had to get creative from set-plays, and it almost worked. A long cross from a free-kick by Christian Panucci by-passed the entire set of players and found it’s way to Roberto Donadoni who was all alone at the far post. The veteran winger forced Inter goalkeeper Walter Zenga to save with his legs onto the post from a first time effort.

After the interval, Milan started with a bang. Boban chipped a ball towards Simone that was cleared, but Savicevic collected the ball, had a shot that was heading straight to Zenga, however it took a wicked deflection off Bergomi and wrong footed the goalkeeper and into the goal.

Somewhat fortunate, but the fans celebrated just as if it were a pile driver from 30 yards out. The question then became how Milan would play with a lead: whether to attack and try to get the killer second goal, or sit and protect what they already had.

It was firmly the former. Savicevic ran the show in his typical stylish and nonchalant way, as he glided across the field of the San Siro, which was not easy at times, as the surface was not in the best condition.

He made a marauding run and set up Simone, but the striker could not finish off from point blank range. Boban then made a darting run of his own and forced Zenga into a diving save. That was the Croat’s last bit of action as he was taken off for Daniele Massaro at the hour mark.

It meant a slight change in system as Milan was now playing with two out and out strikers and Savicevic had some more freedom to operate where he chose. It was one of those rare occasions under Capello that he was afforded such a luxury.

With the fresh legs of Monza-born forward on the pitch, Milan’s attack varied from slow build-up play, quick one-two passes and utilising Massaro’s pace with the occasional long ball. He had couple of decent chances soon after which he spurned, and memories of his misses in the previous year’s European Cup final versus Marseille became all of a sudden fresh in the memory.

However, his contribution was not just to score, as the then-32-year-old proved a useful element on the defensive end as well, both in open play putting pressure on the ball and on set pieces. An all-rounder of some sorts.

Inter were getting desperate and threw on a certain Salvatore Schillaci on with 15 minutes left, and ‘Toto’ made noise almost instantly. On a back pass to Rossi, the keeper miskicked the ball for a corner and from that the Sicilian striker scored with a tap-in while left unmarked at the far post.

There were just three minutes left in the Derby, and the Interesti started lighting their flares in celebration. Had Milan thrown away the three points? Had the Rossoneri just allowed their rivals to get something from a match they had dominated? Were the chances to put the game away coming back to haunt them?

Milan stayed true to their attacking intent as they had done for the majority of the and did not settle for just the point, and it payed off.

A quickly taken free-kick by Albertini was flicked on by Massaro towards Savicevic. Inter cleared the ball, but it fell kindly back to Massaro who collected with his chest, turned on a sixpence, alluded two Nerazzurri defenders and struck a sweetly placed left footed shot into the far corner. Zenga never even moved.

The striker ran off in celebration joined by all his team-mates including Baresi, who jumped onto him, and it set off crazy celebrations in the Curva Sud among other parts of the ground.

Anxiety rocketed at three minutes of added time was revealed on the board, but it was milan that had the best chance as Savicevic made a run, beat a defender with a step-over and Zenga somehow got down in time to stop it with his legs.

It need not matter however, as the referee blew his whistle soon after to secure a famous derby win.

It was much more than three points: it was a win against the old enemy and it virtually sealed the Serie A title. At that point the Rossoneri were 10 points above nearest challengers Juve with just six games left and in an era of two points for a win, the gap was huge. Strangely, Milan did not win any of their remaining games of the league season, as they lost two and drew four of the last six.

The Derby win ultimately proved to be the decisive final win for the Scudetto. Things got even better for our beloved club, as we won the European Cup, destroying Barca’s “Dream Team” 4-0 with Savicevic and Massaro among many others proving vital again.