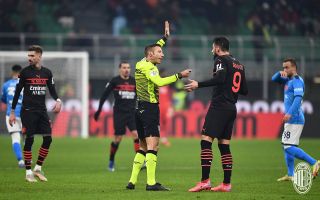 CorSera: Why Massa disallowed Kessie’s equaliser and the doubts regarding the decision

The incident that is dominating the headlines this morning is the decision to chalk off Franck Kessie’s late equaliser for a perceived offside on Olivier Giroud.

This morning’s edition of il Corriere della Sera (via MilanNews) reports that the referee Massa – after reviewing Kessie’s goal on the big screen monitor following being summoned by the VAR chief – decided to take away the late equalising goal.

The decision caused plenty of confusion among players and fans but the paper claims that he made it because because he considered Olivier Giroud’s position to be active shortly before the shot towards goal.

Of course, we can all see that Frenchman did nothing because he was laid flat on the ground and he didn’t even try to go for the ball, so the referee’s decision leaves many doubts just as Milan have already been the subject of a lot of debatable calls this season.

READ MORE: Florenzi confesses Milan were ‘angry’ after defeat: “I don’t remember much of Napoli”