Wide overloads and wise use of a 4-2-2-2: Tactical analysis of Milan’s defeat to Sassuolo

AC Milan fell to their fifth home league defeat of 2021 against Sassuolo on Wednesday evening, and it is arguably the most damaging yet.

In truth, things were going swimmingly for Stefano Pioli’s men after Hakan Calhanoglu opened the scoring in the first half, but it was around about the hour mark when the tide began to turn in favour of the visitors and the Rossoneri were slow to react.

Super sub and Primavera product Giacomo Raspadori was there hero for Sassuolo, causing havoc when he came on and scoring twice in a matter of minutes to turn the game on its head allowing the Neroverdi to snatch the win.

Below are the key tactical takeaways from the game…

The decision to start Rafael Leao as the lone centre-forward was met with a lot of apprehension once again, but in the early stages the Portuguese youngster showed just how he could be a threat. He made a couple of intelligent runs at the right time to stretch Sassuolo, as seen below when he spots Dalot in possession and space to play a pass.

The understanding between Leao and his compatriot is almost telepathic as a laser of a pass finds the former Lille man in space and with the goal seemingly gaping. He actually traps the ball well and Consigli is stranded in the No Man’s Land between his goal line and being able to challenge Leao. 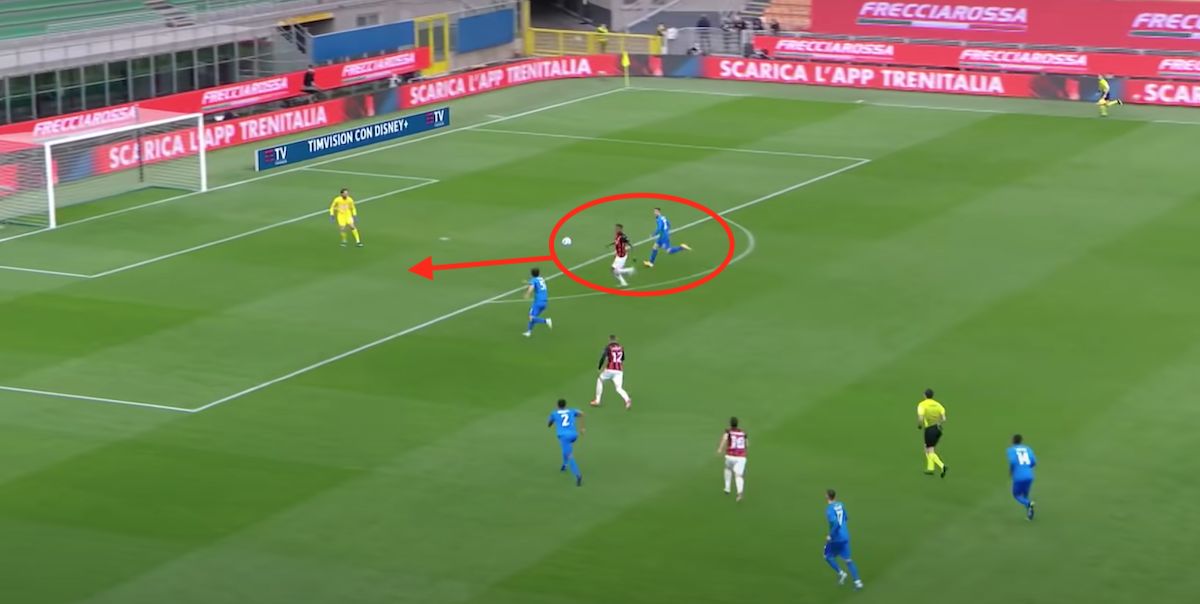 However, rather than striking or taking a stronger touch to open some space, Leao hesitates a bit and takes one small touch too many, with an excellent recovery tackle ending a move that should have resulted in the opener had the 21-year-old been more decisive.

After a cagey opening 15 minutes, Milan began to take control of the game and got their opener around the half hour mark. Pioli spoke after the Genoa game about how he wanted Rebic to essentially play close to Leao to support him up front, and it became apparent that a 4-2-2-2 (basically a 4-4-2) was being used.

In that 4-4-2, Saelemaekers was operating predominantly on the right but looking for pockets in and around the edge of the box, just like against Genoa. Rebic and Leao were occupying a centre-back each and Calhanoglu peeled around to the left to cause momentary confusion.

It worked a treat for the opening goal, as Calhanoglu found the space to receive the pass from Saelemaekers, bringing the ball under control well and then pausing for a moment to allow the two options closest to him – Rebic and Dalot – to create him some space.

Muldur is pulled wide while Marlon is worried that a simple feed could find Rebic should he dart towards goal, and in the meantime Dalot is bombing down the left flank to stop Locatelli from committing to the danger area.

A couple of seconds later and the move has developed perfectly, with Dalot having stopped Muldur from diving in to thwart Calhanoglu, who at this point has the corridor of space to fire in with a trademark finish.

Cast your mins back to the defeat against Juventus at San Siro earlier this year, when the Bianconeri based their entire game plan around getting Federico Chiesa in isolation against Theo Hernandez. Now imagine that again, but with Berardi and Dalot.

In the situation below we can see how Sassuolo committed bodies to the left side of their attack with Milan choosing to man mark Boga, Defrel and Djuricic. As seen by the green circle and arrows, it left the Neroverdi a simple switch of play away from a complete overload on the right side, with Berardi and Muldur stood in their own quarter of the pitch against an isolated Dalot.

One thing Sassuolo do very well through their mobile centre-forward options is play into the striker and back out, though their ability to turn caused problems too (as we will see later). Below, we again see how Dalot feels he has to deal with the immediate danger and may have to move into the space highlighted in green should Sassuolo break the last line, leaving Berardi alone.

In truth, Milan are very lucky that the pass was a bit weak and Berardi did not attack the ball as aggressively as he could have, because it gave the Manchester United loanee just enough time to get across and block well. It was a highly dangerous chance though that set the tone.

As shown above with the well-executed plan leading to the goal, there were signs that Milan’s fluid 4-4-2 could be something to work on as an emergency configuration. In the second half the Rossoneri created openings through their movement and direct play on the counter, looking for the second goal that was lacking in putting Genoa away.

In the sequence below, it can be seen perfectly how Rebic is the man this time who – instead of Leao – runs off the shoulder of the last defender while Kjaer is allowed to step up and play a ball over the top. He does so knowing there are three players clustered together, increasing the chances of it being a successful ball to cause danger.

Rebic on a couple of occasions showed good endeavour to chase long passes and trap them well, and he did so in this instance too. By the time the Croatian had brought the ball down he had options as a triangle had formed.

For all Leao’s movement was smart in the first passage analysed, it was simply dreadful here. There can be no excuse about offside fears, he is simply flat-footed and fails to make what would be a pretty straightforward run which would have allowed Saelemaekers to put him through on goal, as Ferrari scampered over to cover the Belgian.

This may be a premature call, but if Milan are looking for a young, talented striker who is both excellent when the attack is fluid but can also quarterback the game like Ibrahimovic, then Raspadori looks like being a man who can do exactly that.

He caused more carnage that the European Super League when he came off the bench, feeding perfectly off the fact Tomori had been told to man mark him by occupying the space of a No.10 between the back four and midfield. Milan’s narrow defensive shape and Sassuolo’s gung-ho attacking style under De Zerbi – helped by being a goal down – meant that the threat of the overload out wide was always there.

In this still below, you can see how Tomori has been dragged out to try and put pressure on Raspadori, but unlike other centre-forwards that the Englishman has tried to challenge directly the young Italian had/has incredibly quick feet, allowing him to turn and release the ball in a split second.

Dalot has been pushed inside as a consequence of Tomori pushing up but also by the fact Sassuolo have five players in and around the edge of the box, meaning their Rossoneri counterparts were fearing being overrun down the middle.

The situation then almost resets as another substitute in Toljan picks up the ball on Sassuolo’s right flank, and the mistake comes when both Kessie and Tomori head for the same spot allowing Raspadori to ghost towards the penalty spot. It is the kind of miscommunication that happens when you are all over the place structure wise and are unclear on marking assignments.

The result is that Toljan actually just fires a ball vaguely into a threatening area knowing that both Boga and Traore will be on hand even if Raspadori doesn’t get there, because Milan have all their men committed in the wrong area as circled in blue.

Milan actually adjusted well pretty quickly after conceding in the way that they did, but the second goal stems from a sloppy Kjaer giveaway. In this situation though everyone has a man and Dalot has pushed up well to try and stop the threat and supply from the Neroverdi’s right side. However, the danger can be seen a mile off again as Tomori is too focused on playing the line this time rather than keeping tabs on where his man is. 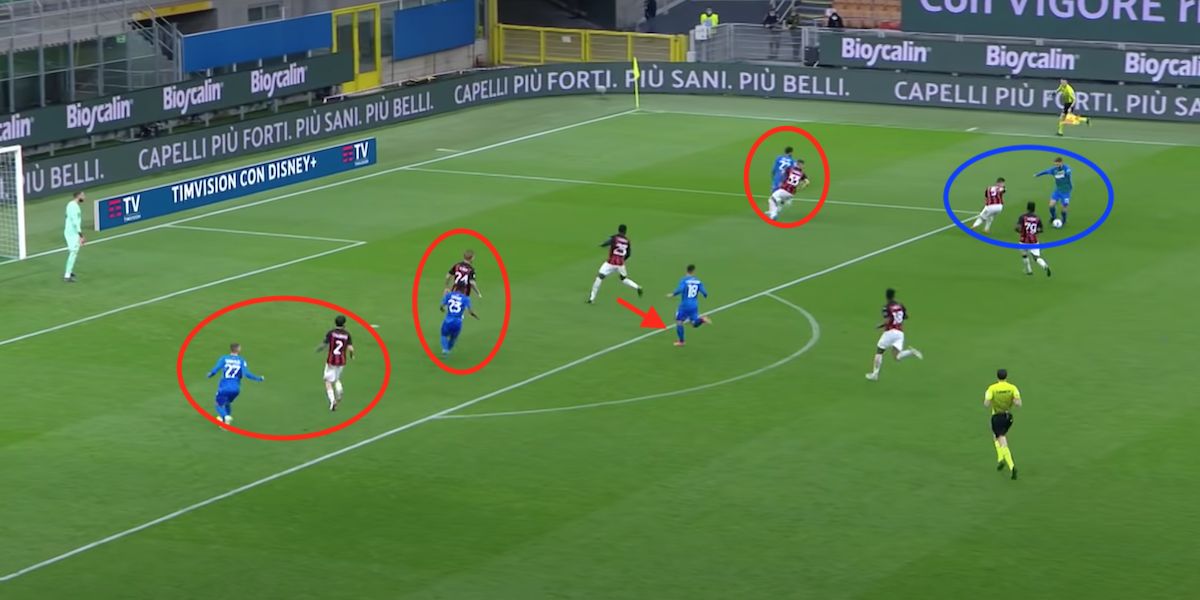 The consequence is that he gets stuck in a weird ‘in-between’ phase of not being touch tight nor giving himself enough room to make a recovery challenge. That means that once the ball gets fired in to Raspadori, he again uses his quick feet and acceleration to take a touch around the Chelsea loanee and fire.

The final question mark has to be on Donnarumma. The screenshot below is taken at the moment of shooting and Gigio is well positioned, but he does not move at all. Instead, he watches the ball fizz past him low down and hit the far post before going in. Not even a dive?

This section could very well be called ‘the broken record’ for the amount of times that the match review highlights the exact same worrying tendencies.

We start with the heat map, and guess what – it shows that Milan once again preferred to play down their left side. In fact, in both halves it was almost identical. This shows that the Diavolo have no variety, that they are predictable when it comes to patterns of play, that the right wing offers little threat etc. etc. – you’ve heard it all before. 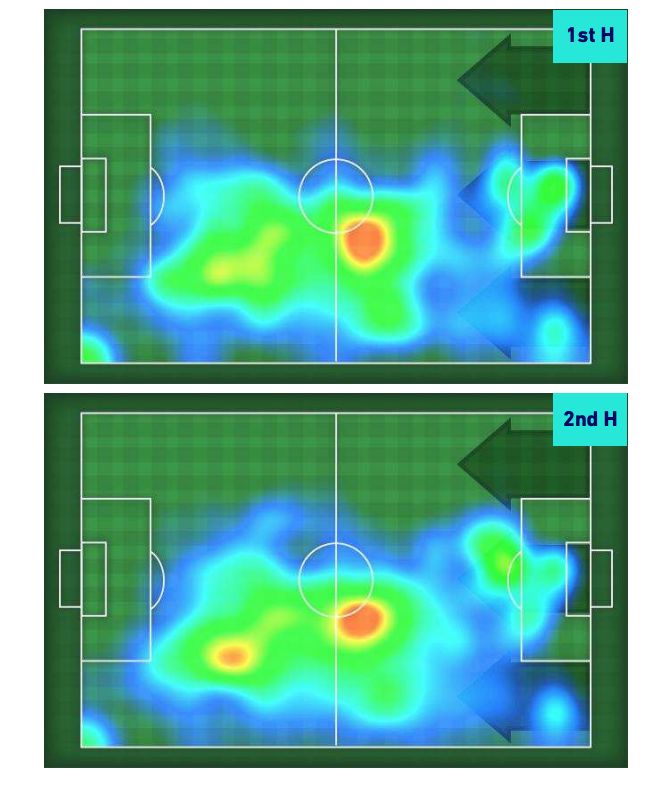 The touch map mirrors the above in terms of Milan’s touches, but what must be noted is that neither Calhanoglu nor Rebic got on the ball enough in the attacking zone (4 times each compared to Leao’s 8). That shows that while the plan of playing a 4-4-2 was there in principle, in action it still had the Portuguese striker very isolated.

Sassuolo had a lot of touches in the wide areas which demonstrates their approach to play through the middle and then spread wide at the right moments, which got them both of their goals. Milan did limit the threat of Boga and Berardi quite well in terms of dangerous touches, however. 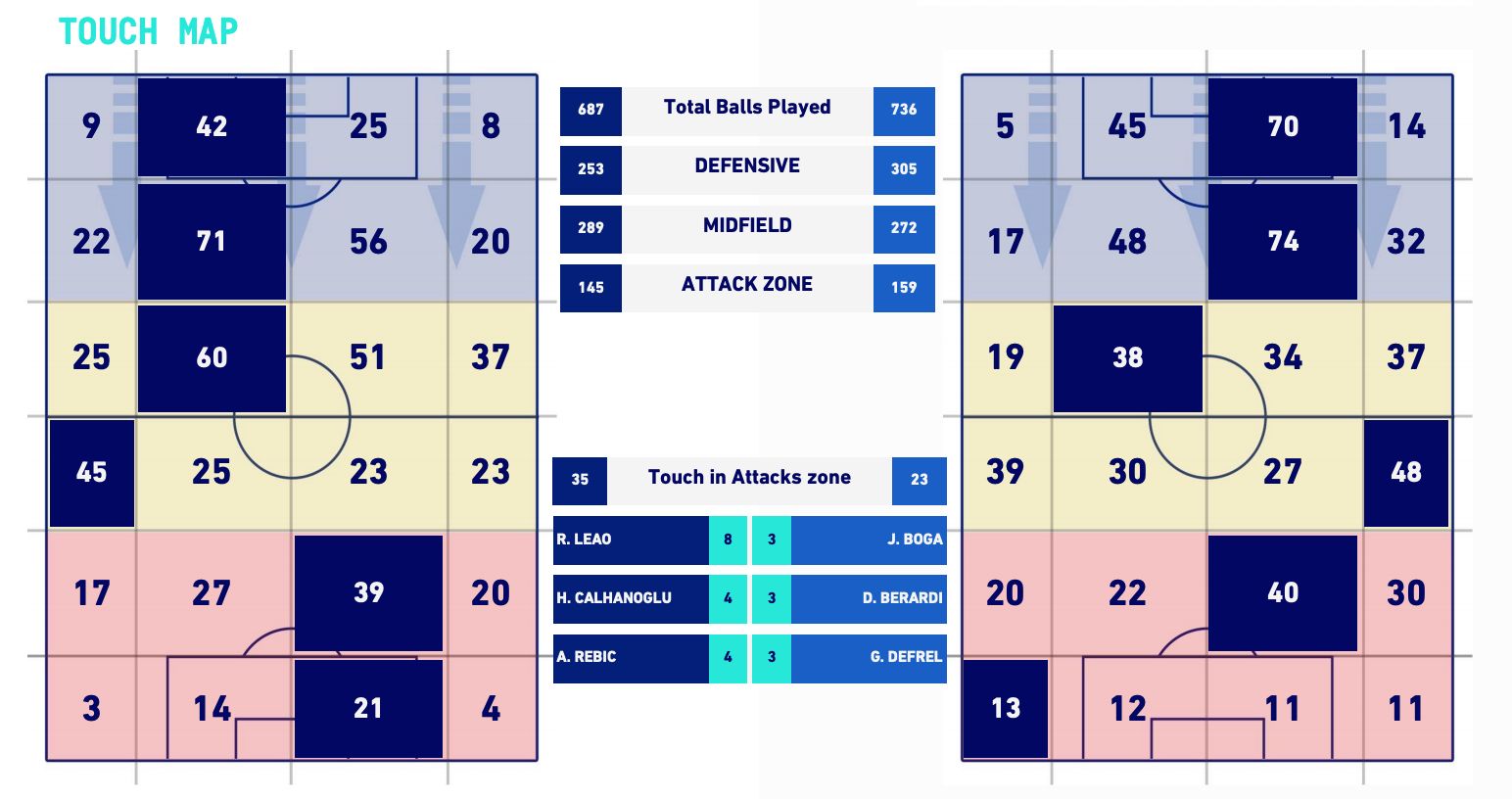 Finally, the touch map shows organisation versus chaos. In the first 45 minutes Milan’s 4-2-2-2 shape is clear to see and Pioli will no doubt be very pleased looking at the data, but in the second have the team got dragged over to the right side which – as pointed out – left Dalot (and apparently Calhanoglu) with too much to do on their own. 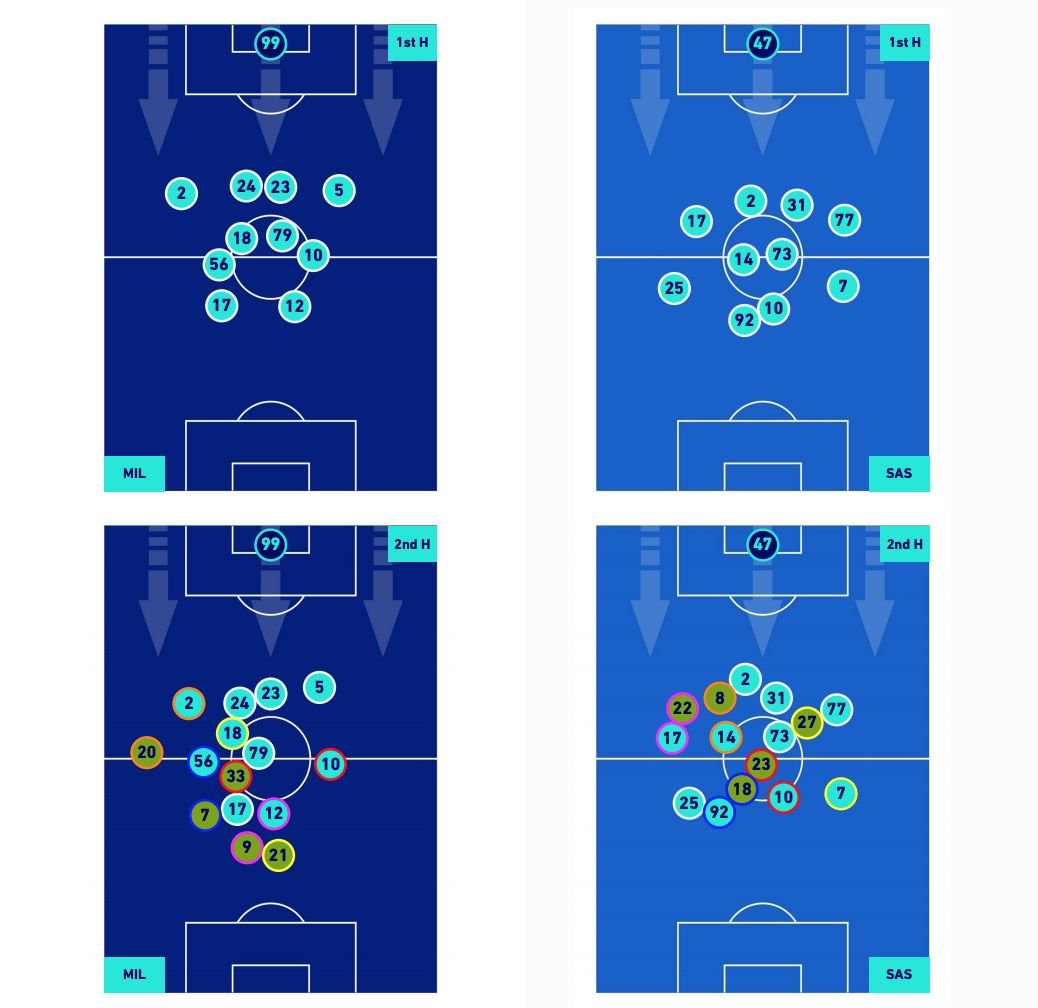 The sad but honest bottom line is that Milan always seem to do something wrong. Whether it is simple individual errors, getting sucked into traps, managing the game poorly, failing to press well, squandering counter-attacks or a combination of those things, it has been a long time since we saw a near-perfect performance. That has to change, or 5th place beckons.