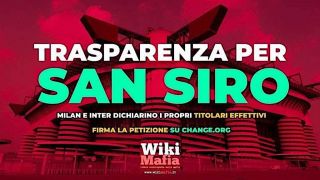 Wikimafia appeal to Milan Council over stadium project: “There is no going back”

A request has arrived from an organisation named ‘Wikimafia’ asking for more transparency from the Milan Council over the stadium project.

Milan along with their city rivals Inter have made clear their plans to construct a new state-of-the-art home on the site of the current San Siro, in order to help both clubs move into an exciting new era.

The two clubs recently confirmed that they have finally struck an agreement with the Municipality over the size and scale of the development, as announced via a press release.

It was an important step for the two clubs who are edging towards a complete agreement for the entire project, with an inauguration date for the new stadium floated around as being 2024.

However, the Wikimafia association have decided to launch an appeal to Mayor Beppe Sala and the President of the City Council Lamberto Bertolè to obtain greater transparency regarding the project. A petition has also been launched on Change.org, and you can read the press release attached below…

In these difficult weeks for our city due to the health emergency, the question of the possible demolition or refunctionalisation of the San Siro Stadium, named after Giuseppe Meazza since 1980, has become overwhelmingly topical.

We have decided to write to you, confident of your sensitivity on the subject, to express serious concern and perplexity on the transparency of the entire real estate transaction that prompted the Milan and Inter companies to propose the two redevelopment projects in the area.

From Milanese citizens engaged in the fight against the mafia, corruption and tax evasion, as well as in promoting transparency in the public administration, we judge extremely negatively the fact that to date Milan and Inter have not yet responded to the request made on 4 October 2019 by the President of the Anti-Mafia Commission David Gentili, to declare its effective owner, i.e. the natural person or persons who own or directly or indirectly control the two entities with which the Administration is dealing.

Why so much reticence? Faced with an intervention of such importance from an economic point of view, which will change the urban layout, as well as transforming one of the symbols of our city, we believe we cannot stand by and look and pretend nothing is happening. Also in light of the reputation of “vulture” of the Elliott fund, owner of Milan – whose modus operandi has been effectively described by the economist Marco Ambrogi – what guarantees does the city of Milan have that we are not dealing with investors interested in mere speculation, who do not really believe in the development of our territory? Does it seem right to you to sign a concession, a contract or an urban planning agreement, with someone whose identity is unknown?

Above all: if we do not know the investors, what guarantee do we have on the origin of the capital invested? The recent financial scandal that has also involved Generali in a minimal part, with the dividends of some bonds financed by the proceeds of various companies, some of which related to the ‘Ndrangheta, should alert us to protect the city, its history and its symbols from possible assaults on dirty capital, given the ascertained strategic importance that Milan has played and plays in the criminal dynamics related to the international money laundering, highlighted by several investigations by the District Anti-Mafia Directorate in recent years.

There is no going back. Especially if this step backwards concerns the San Siro Stadium, which is one of the symbols of our city , which has rightly earned the nicknames of “Scala del Calcio” and “Tempio del Calcio”, being the most titled stadium in the world and the largest in Italy. Without going back over all the awards it has had, such as the second place in 2009 in the ranking of the most beautiful states in the world compiled by the Times, it is sufficient to remember that in the 2014 research conducted by the Chamber of Commerce and the University of Milan, San Siro is in third place among the most identifying works in the city, after the Duomo and the Triennale. On the same official site, the San Siro Stadium is described as “a legend” of football.

We therefore do not share the opinion of the Regional Commission for the cultural heritage of Lombardy, which last May 20 deemed the plant not worthy of any protection (opinion on which we know two hierarchical appeals have already been submitted to the Ministry of Cultural Heritage, one from part of the Verdi-Europa Verde in Milan and the other by the San Siro Green Committee).

We remain opposed to the hypothesis of the demolition of a symbol of the city of Milan, as well as a real icon of Italian sport, also on the basis of strictly technical assessments: the new stadium would have a maximum capacity of 60 thousand seats, when last 9 February saw 75,817 spectators attend the last Derby Milan-Inter match, which would mean cutting off from one of the most prestigious matches on the European scene and among the best known in the world one, a not at all indifferent slice of fans.

It would be a strange case of supply that does not meet demand, in the economic capital of Italy: the recent decline in the number of spectators, which is already recovering, can transform the redevelopment of San Siro into a unique case in the world of capacity reduction compared to the construction of new plants, in contrast to what has been done by the other major European clubs, which have doubled or almost doubled it, betting on a big vision of themselves in the medium term, as Antonio Cunazza has pointed out?

And it is here that the suspicion arises that in reality the interest is not the revival of sport and football in our city, but “extracting value” from the San Siro Stadium in order to “reward” the shareholders with the profits made with the real estate operation underlying the two projects presented by Milan and Inter . Also because the assumption that led to the decision not to opt for the restructuring of San Siro, that is the higher costs, is also denied by the same official analysis of the two clubs ( the restructuring would cost about 510 million euros against 650 million euros of the new stadium).

We appreciated the statements of the Mayor Sala about his opposition to granting more than double building indices, however the agreement found with the companies to set the volumetric index at 0.51, against the 0.35 imposed by the Pgt, it seems to us also goes decidedly against the environmental emergency declaration voted by the City Council on May 20, 2019.

For these reasons, we ask you to be guarantors of us citizens on a fundamental theme such as that of transparency on the origin of the capitals that are invested in our city, but also the protection of the identity symbols of Milan and its environmental sustainability.

Pending a response from you, we ask all sensitive citizens to sign this appeal and spread it.