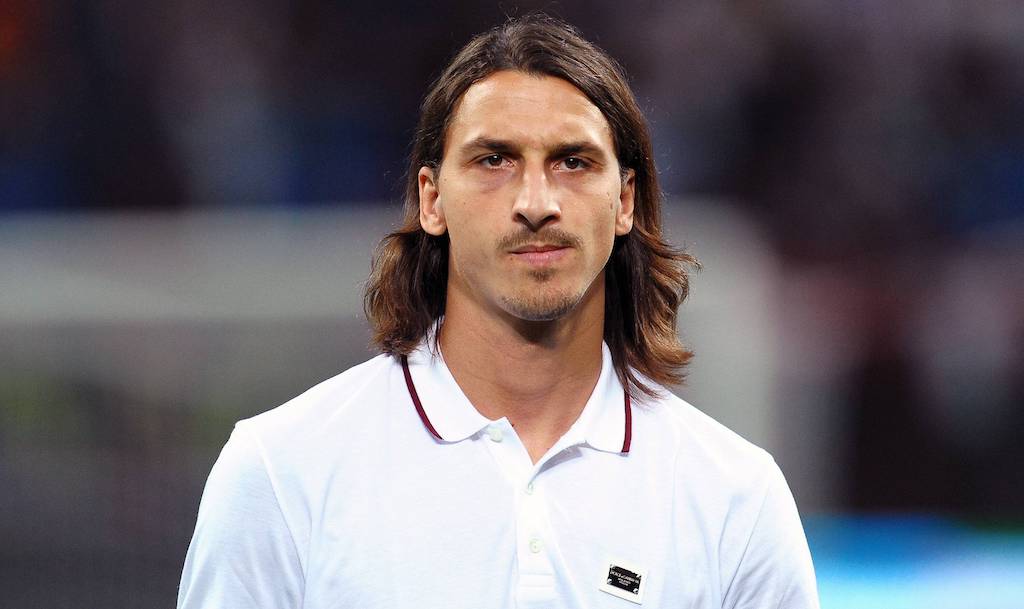 Zlatan Ibrahimovic and AC Milan: A decade-long love story that seems to know no end

“I’m back at Milan, where I feel at home.” Those were the words of Zlatan Ibrahimovic when he touched down at Linate Airport on Saturday night as he prepares to continue his journey with the Rossoneri.

It was fitting that exactly 10 years after first wearing the famous red and black shirt of the seven times European champions, he would extend his contract for a further year. It was not without its drama, but then again this is Ibra and the Swede does not do things in the conventional manner.

The Malmo-born striker joined AC Milan initially on a loan with an option to buy from Barcelona on the 28th August 2010. His start was not the best, as he missed a penalty in a 0-2 loss to Cesena, but as he and the club had better times ahead in that campaign.

Under the management of Max Allegri, there was a clear tactic as the team was built around Zlatan, which in hindsight was probably one of the reasons that he joined in the first place.

Following that stint in Catalonia where he was classified a “failure” despite 22 goals in 46 games, he needed to feel important again. He found a team in Milan that was in need of an inspirational figure and the club found in him, a player eager to prove himself again and help them win.

It was a combination that meshed well.

His first goals for the club came in Europe with a double against Auxerre, but it was not until an away match against Napoli that the team really started showing their true potential. The Partenopei were genuine contenders for the Scudetto, but the Lombard team walked into the San Paolo and triumphed 2-1. Needless to say Ibra made his presence felt with a header to open the scoring.

It was not just his goals and his ability to set up his teammates that made the then-29-year-old such an invaluable member of the squad. Zlatan has an air of confidence bordering on arrogance that can uplift any team he plays at, whether at club or international level.

Even with a team containing such illustrious veterans as Pippo Inzaghi, Clarence Seedorf, Rino Gattuso and Alessandro Nesta – Ibra stood out.

His temperament and composure under pressure was evident throughout that campaign. One particular occasion was against city rivals and his old team Inter. In just the fifth minute, Milan were awarded a penalty and under the chorus of jeers and whistles from the Curva Nord, Ibra dispatched his spot kick with the confidence and looked up to the Interisti as if to say: “Your noise did not affect me.”

Besides his coolness in the hotly contested Derby della Madonnina, Ibra also showed his penchant for the spectacular with an overhead kick against Fiorentina at the San Siro. After scoring the goal, he fell awkwardly and hurt his right elbow, not that teammate Gattuso cared, as the captain jumped on the player to celebrate.

One might think though that the adrenaline of scoring such a spectacular strike would have quelled any pain the player would have been experiencing.

Ibra’s combative nature has never been in question and the striker was involved in a training ground bust up in November of 2010 with defender Oguchi Onyewu. Ironically it was the striker making a tackle on the defender that ignited the confrontation, of which Gattuso tried to stop, which reportedly caused the midfielder to take a punch in the face for his efforts. There is rarely ever a dull moment when Ibra is around.

Milan’s play was solid if not spectacular, as Allegri had the team playing with a strong defensive shape, but the “X-factor” was always Ibra, as his ability to conjure up something out of nothing was always in the air.

He did just that at the start of the calendar year 2011. A long ball forward (a tactic often employed by Allegri that year) was chased by Ibra and from a seemingly improbable angle and distance, swung his left boot at the ball and it flew over the Lecce goalkeeper.

During that title tussle ten seasons ago, the Rossoneri were up against Napoli in what was arguably the moment when the team took that step forward to claim the Scudetto. On a late February night at a full San Siro, Milan ran out 3-0 victors with goals from Ibra, Kevin-Prince Boateng and Alexandre Pato.

While they fell short in the cup competitions, being knocked out by Tottenham in the Champions League and Palermo in the Coppa Italia, Milan kept getting results in the league. The Scudetto was clinched after a scoreless draw away to Roma to set off celebrations from the travelling away fans and Milanisti around the globe.

Not only did the club win it’s 18th Serie A title, but that they took it off Inter just added to the delight of the triumph. Ibra finished that season with 21 goals and an impressive 12 assists. A scorer and a provider of goals. He won both the Serie A foreign Player of the Year and Serie A Player of the Year at the end of season honours.

He and Milan started the following year in fantastic fashion as they defeated Inter in the Supercoppa Italiana with a 2-1 comeback win, with Ibra scoring a header and Boateng grabbing the game winner within 10 minutes of each other in Beijing.

That 2011-12 would be phenomenal for Ibra on a personal level as he not only maintained his goal output, but increased it. After 16 matches he had amassed 14 goals and was leading the club to another Scudetto in his second season.

However, it would be remembered for a number of other reasons, in particular for what occurred on the 25th February 2012. Ibra was serving the last of a three match ban after slapping Napoli player Salvatore Aronica so he would miss the clash against Juventus, along with Seedorf.

We could talk about the whining and complaining of Antonio Conte, something which he has maintained all these years later. We could talk about the “letter sent to the FIGC” asking for respect for Juventus, but the fact remains on that fateful day over eight and a half years ago, the Scudetto showdown between the arch-rivals at the San Siro changed the outcome of the title.

Milan were leading 1-0 thanks to an Antonio Nocerino goal, and Sulley Muntai headed in from a corner with the ball clearly crossing the line. Inexplicably neither the referee nor the linesman gave the goal and the Bianconeri eventually tied the game.

When Ibrahimovic returned he continued to plunder goals at a rate of knots in a variety of ways. Left foot, right foot, free-kicks, penalties, headers, inside and outside the box. He drew comparisons to club icon Marco Van Besten for his ability to glide across the field with the ease of a dancer despite his 6 ft 5″ frame.

In Europe, Ibra had his best game for the club versus Arsenal in a 4-0 victory, scoring one and setting up both of Robinho’s goals, but the club were knocked out by Barcelona in the quarter-finals. Milan would end that season second in the league as Juve would claim the Scudetto, that despite Ibra’s 28 goals in just 32 games, which stands as arguably his best individual season of his career.

That season would be his last full season. The club was going through economic difficulties, as president and owner Silvio Berlusconi did not invest in the club as he had done previously and with the league itself not as lucrative as it once was, Ibra was sold to PSG along with defensive stalwart Thiago Silva.

It must be stated that the fee of €20m Euros for a player of Ibra’s quality and stature and what he meant to Milan fans was a paltry sum, and one that all connected with the club looks back with regret. He would go on to win trophies galore with the Parisians, in addition to stints at Manchester United and LA Galaxy in America.

In the years following, Milan have struggled to say the least. Constant changes in ownership and coaching staff, players coming and going with very few making the sort of impact that is expected of a club of il Diavolo’s status, failure to meet Financial Fair Play requirements, agreeing to forego their place in the Europa League – it’s been a turbulent several years for the club.

In mid-November of 2019, Ibra announced that he would be leaving America and the MLS, and the rumours went into overdrive as to the now 38-year old’s next destination. Milan’s director Paolo Maldini got to work and along with others convinced the striker to return to the Rossoneri.

On the 27th December he was signed by Milan on a six-month contract and Milanisti around the world rejoiced. Ibra always said that he never wanted to leave the club but was forced to accept the transfer due to the club’s financial situation, but now he had returned after seven and a half years.

More experienced and with the responsibility of a leadership-type role at the club – not just in terms of playing on the field but everything else as well – meant Ibra’s aura had an affect on a team in need of a jolt.

With him in the side, manager Stefano Pioli switched from a 4-3-3 to a 4-2-3-1 with Ibra at the top supported by the likes of Ante Rebic, Hakan Calhanoglu, Rafael Leao, Samu Castillejo and Giacamo Bonaventura.

Milan’s fortunes slowly but surely transformed. Not only in terms of results, but in a style of play that the fans have come to expect and yearn for from their team. Ibra’s first goal in his second stint was against Caglairi with a calm left footed finish in a 2-0 away win, but he was just warming up.

Following the resumption of play after the lockdown due to the Coronavirus, the club’s play went from strength to strength. A record of nine wins and three draws was achieved as Milan finished in the Europa League places, albeit they will have to go through the qualifying phases.

Players raised their game to their fullest potential, they looked happy and relaxed on the pitch and the fans became more optimistic about the future. It led to the club shelving plans to hire Ralf Ragnick as the coach and they extended Pioli’s contract for a further two years.

It was taken for granted that Ibra would extend his contract with Milan, but as the days turned into weeks, fans started getting slightly impatient. The question went from when to if the Swedish superstar would even stay with the club. Last week those in the know confirmed the player’s contract extension, even stating the finite details of the deal.

However, his agent, the one and only Mino Raiola stated unequivocally through his Twitter page that it was “Fake News.” Needless to say, that caused a reaction from many of the clubs fans, who saw the post as a way to take them for a ride, not least because Milan have also been hoping to extend the contract of another of the agent’s clients in goalkeeper Gigio Donnarumma.

This is how Raiola operates, but low and behold negotiations continued and an agreement was reached. Ibra headed back to Milano on Saturday night to sign his contract this Sunday. The drama and intrigue; we probably should not expect anything less from Ibra, who lives for the spotlight.

As he talked to reporters, he said: “I’m fine, in shape. Now we need to bring results. I’m not here to be a mascot, but to bring Milan back to where it needs to be.”

Inspirational sentiments, but now it’s time to turn those words into action, continue the good form of the last few months of the season, guide this young team and bring back Milan to glory.