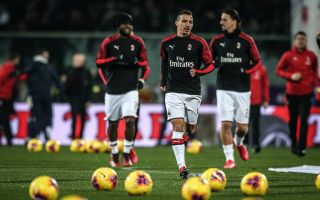 Paris Saint-Germain are willing to put a sizeable offer on the table for AC Milan star Ismael Bennacer but the Rossoneri’s stance is clear, a report claims.

Tuesday’s edition of Tuttosport (via MilanLive) claimed that Paris Saint-Germain, Manchester City and Real Madrid are all interested in the Algeria international.

They went as far as to say that Milan have already sourced his potential replacement should the player push for a move in Espanyol star Marc Roca.

According to the latest from SportMediaset (via MilanNews) though, the potential departure of Bennacer would be very complicated because – despite the PSG are ready to put €40million on the plate – the former Empoli regista is one of the pillars of the midfield that Ralf Rangnick wants to build.

In addition, the outlet adds that Roca is actually among three targets Milan have in mind to partner Bennacer in the midfield, along with Tiemoue Bakayoko and Florentino Luis of Chelsea and Benfica respectively.